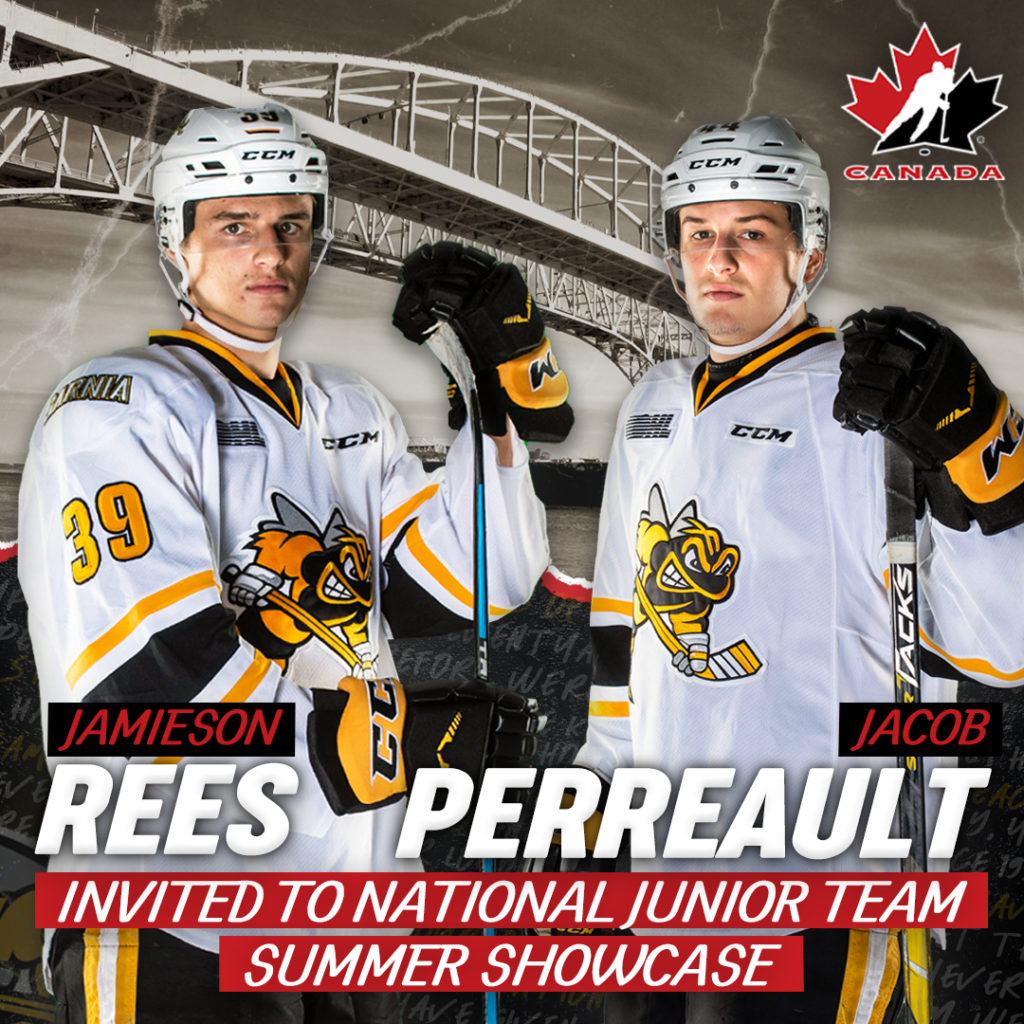 CALGARY, Alta. – Hockey Canada has announced a roster of 41 players invited to its virtual National Junior Team Sport Chek Summer Development Camp, set for July 27-31, as well as the assistant coaches that will work behind the Team Canada bench at the 2021 IIHF World Junior Championship.

Included in this list are a pair of Sarnia Sting forwards.

19 year- old, Carolina Hurricanes prospect Jamieson Rees will attend this annual camp for the second time, determiend to crack the National Team squad this time around. 18-year old, NHL draft eligible forward Jacob Perreault will get his first taste at the u20 level.

Five goaltenders, 10 defencemen and 26 forwards will attend the five-day virtual camp, participating in a variety of sessions with a focus on player development through online education. The roster includes seven players who helped Canada win gold at the 2020 World Juniors (Byfield, Byram, Cozens, Drysdale, Lafrenière, McMichael, Mercer). Of the 41 players, 16 were selected at the 2019 NHL Draft, 22 will hope to have their name called at the 2020 draft, two are eligible in 2021 and one is eligible in 2022.

“We are excited to begin preparations for the 2021 IIHF World Junior Championship with this group of 41 players and our full staff at our online camp, as we believe we have a good mix of veteran leadership and young talent that are eager to represent Canada during the holiday season,” said Scott Salmond, senior vice-president of national teams for Hockey Canada. “We are also pleased to have Michael and Mitch round out the coaching staff, as their Canadian Hockey League and international experience will compliment André’s leadership while we work towards defending our gold medal on home ice.”

Dyck recently completed his second season as head coach of the Vancouver Giants of the Western Hockey League. He previously served as head coach of the Lethbridge Hurricanes (2005-09), was an assistant with the Medicine Hat Tigers (1996-97), Lethbridge (1997-2002), the Vancouver Giants (2002-05) and Kootenay ICE (2013-14), and coached the Lethbridge Hurricanes of the Alberta Midget Hockey League (AMHL) to a bronze medal at the 2018 TELUS Cup, Canada’s U18 Club Championship. Dyck was head coach of Canada’s National Men’s Summer Under-18 Team at the 2019 Hlinka Gretzky Cup, leading the team to a silver medal. He was also head coach of Team Pacific at the World Under-17 Hockey Challenge in 2010 and 2012, won a silver medal with Canada at the 2016 Winter Youth Olympic Games, and coached Alberta to silver at the 2015 Canada Winter Games.

The 2021 IIHF World Junior Championship returns to Canadian ice this December, with Edmonton and Red Deer set to co-host the annual holiday tradition. Games will be played at Rogers Place, the home of the NHL’s Edmonton Oilers and the WHL’s Edmonton Oil Kings, and at the Westerner Park Centrium, home of the WHL’s Red Deer Rebels.