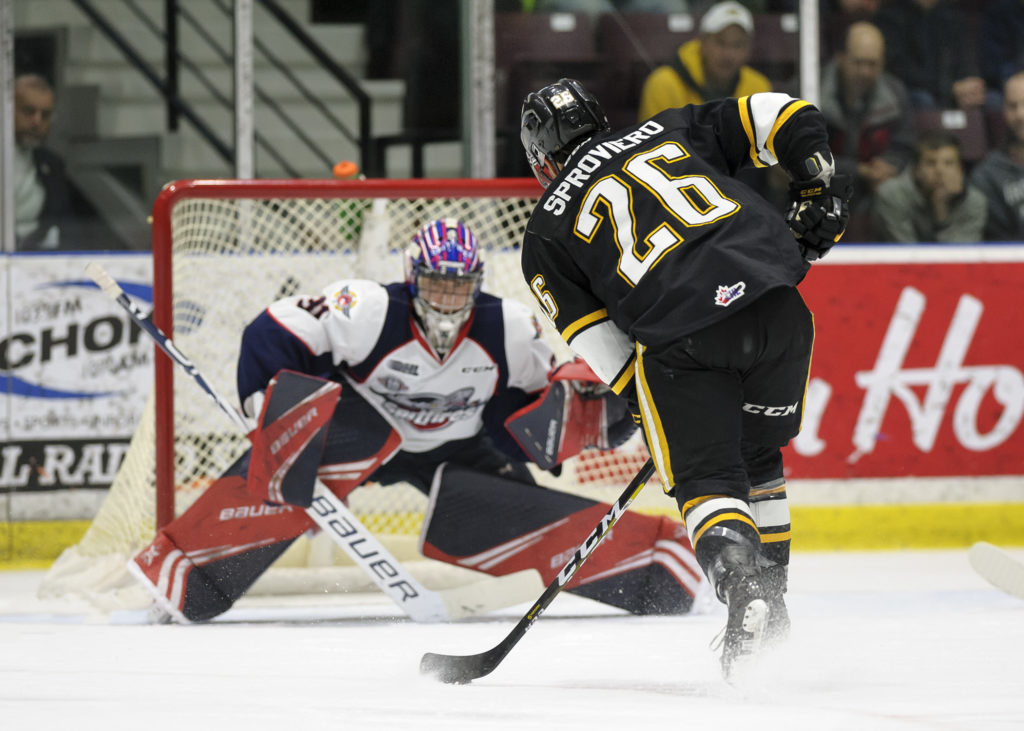 It was the second half of our home-and-home series with the Spits this weekend. This time, we were back on home ice at Progressive Auto Sales Arena. Looking to bounce back after last night’s loss, the Sting battled hard once again.

In the first period, towering Spitfires forward Curtis Douglas opened the scoring. Douglas swung over the blueline and released a sharp shot that went blocker-side past Sarnia netminder Cameron Lamour.

Spitfires forward Chris Playfair put the visitors ahead. Playfair hopped on a loose puck in front of Lamour and made it a 2-1 game.

Nathan Staios extended the Spitfires lead. Staios sent a long shot through some bodies in front of Lamour, taking full advantage of the screened netminder. Staios’s shot put Windsor ahead 3-1 after one period of play.

In the second stanza, the Spits continued to push their offensive pace. Douglas scored his second of the game with almost a carbon copy of his earlier blocker-side snipe. Douglas’s powerplay goal from the top of the circle made it 4-1.

Playfair then scored his second of the evening to make it 5-1. Douglas dished a centering pass to Playfair, who was open in front to toss the puck past Lamour.

Sting defenceman Mitch Eliot began our charge back. With the Sting on the powerplay, Eliot sent a point shot through Incze and under the crossbar. Eliot’s fifteenth tuck of the season brought the score to 5-2.

.@mitch_eliot44 with an upstairs snipe on the powerplay! 1️⃣5️⃣ on the season for the #Canucks prospect!#SARvsWSR pic.twitter.com/LlxxMWWTTG

Tyler Angle responded a minute later for Windsor. Angle picked up a perfect pass from Staios to one-time the puck into the cage.

Sarnia rookie forward Jacob Perreault came back with an answer. Perreault corralled a bouncing puck in front of Incze and put it over the goal line. Perreault leads all Ontario Hockey League freshmen with twenty-seven goals this season. Through two frames, it was a 6-3 matchup.

In the third period, Spits rookie Will Cuylle put the visitors up 7-3. Douglas spotted Cuylle with a well-placed pass to give Windsor a four-goal advantage.

Sean Josling kept Sarnia in the game. Following up a Ryan McGregor shot that Incze kicked out into the middle, Josling batted in the rebound. Make it 7-4. It held as the final score.

We’ll see you on Monday for our Family Day game against the Saginaw Spirit! Puck drop is 2:05 PM. Pick up your tickets by clicking the link below or by clicking right here!