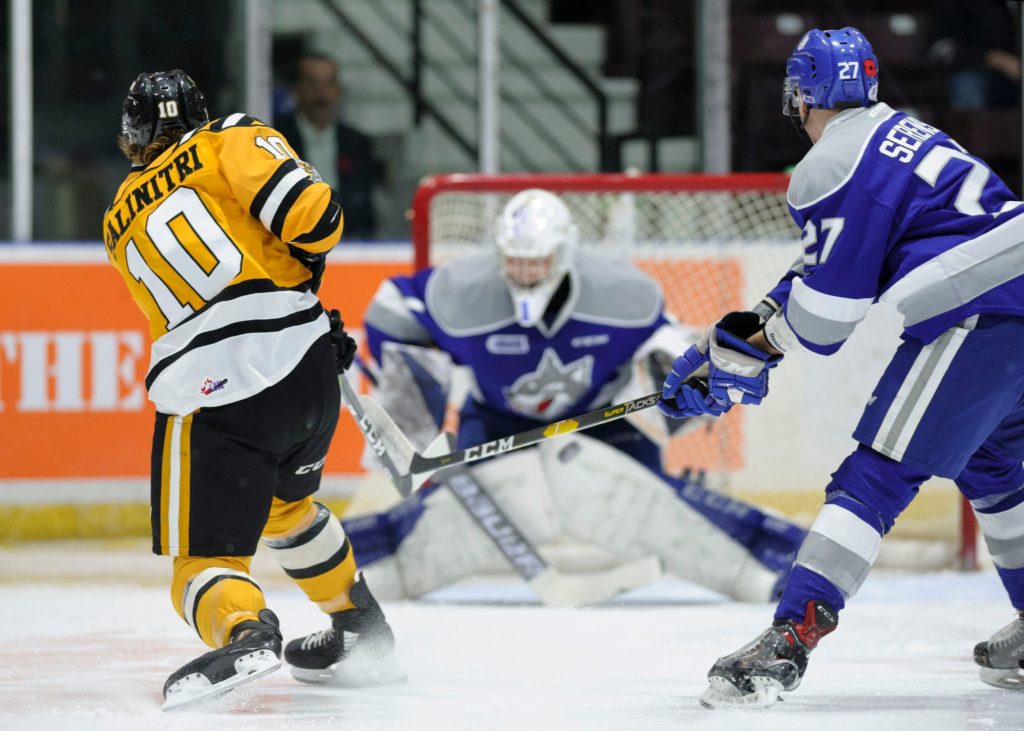 The Sarnia Sting hosted the Sudbury Wolves on Saturday evening.

It was the second of back-to-back games this weekend for each team. Before the game, we held a Remembrance Day ceremony in honour of our troops. The entire Sting organization is incredibly thankful for all the sacrifices our veterans have made and continue to make every single day. Lest we forget.

In the first period, the Sting struck early. Second-year forward Brayden Guy picked up his fifth of the season just ninety seconds into the game. Guy took a pass on the doorstep from Franco Sproviero and jammed the puck into the cage.

Sudbury responded right away. Veteran defenceman Cole Candella tied the game at 1-1. Candella snuck down to the back door and potted the puck past Sting netminder Aidan Hughes.

Macauley Carson scored for the Wolves before the end of the first. Sudbury held a 2-1 lead after the opening period of play.

The middle frame was a back-and-forth battle, but the Sting took over late in the second.

In an awesome moment, Sting defenceman Alexandre Hogue scored his first career Ontario Hockey League goal. Hogue took a hard shot from the top of the right circle, and it went flying through Wolves goalie Ukko-Pekka Luukkonen. The game was now tied 2-2.

With two seconds left in the second period, Hugo Leufvenius gave the Sting a 3-2 lead. Leufvenius took a high shot from between the hashmarks that sailed over Luukkonen. For Leufvenius, it was his ninth of the season.

Sarnia remained in the lead throughout the third until Sudbury tied the game late. With Sudbury’s net empty for the extra-attacker, Candella’s second of the game sent us to overtime tied at 3-3.

When the extra period solved nothing, it was off to the shootout.

Hughes turned aside twenty-three shots on twenty-six faced. The official box score can be viewed here.

We’ll return to action on Wednesday night when we visit the Owen Sound Attack. And we’ll be right back here at The Hive on Friday evening when we host the Oshawa Generals for the lone time this season! Tickets can be picked up by clicking the link below!

NEXT HOME GAME: STING vs. GENERALS