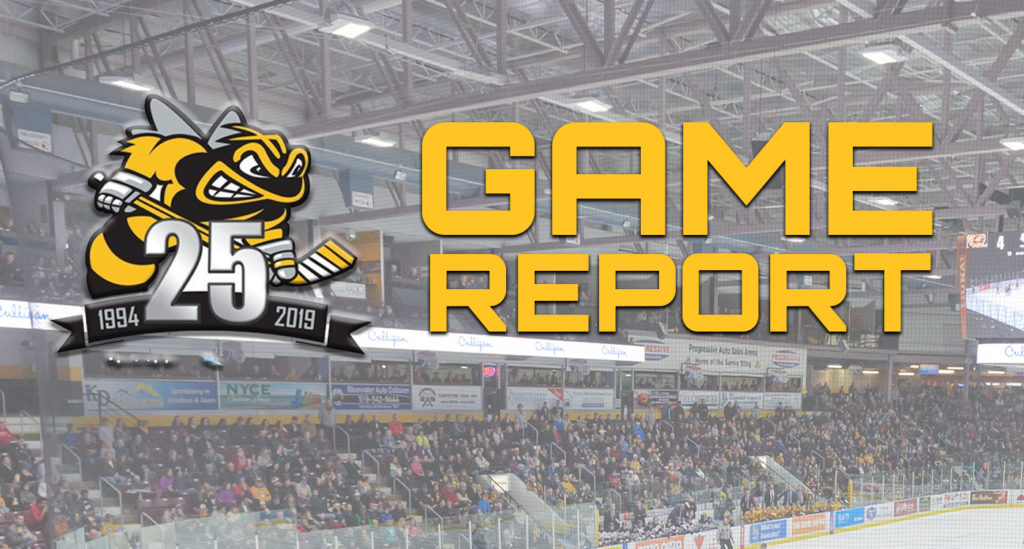 The Sarnia Sting visited the Kitchener Rangers on Friday night.

It was the second meeting of the season for these two Western conference rivals. Before the game, the Rangers held a beautiful Remembrance Day ceremony. We are proud to have had the opportunity to participate in such an outstanding tribute to our veterans.

Once the puck dropped, it was game on. And things sure did get off to an incredibly fast start.

But wait, there were more goals in that minute. Sarnia captain Ryan McGregor responded only twenty seconds later. McGregor took a wraparound behind the Rangers’ net and tucked in a sweet tally past Kitchener netminder Lucas Pfeil.

.@ryanmcgregor84 showing why his hockey IQ is off the charts with this wraparound goal! 📈 pic.twitter.com/sA6Gxrgw5h

Keeping the trend of goals coming, Sting rookie forward Justin McCombs scored his second of the season. McCombs finished off a nifty passing play with new linemates Hugo Leufvenius and Calvin Martin. We held the lead, 2-1.

Three minutes post-Damiani, Sting forward Curtis Egert scored one of the coolest goals you’ll ever witness. Fully seated in front of the Blueshirts’ crease and facing away from the net, Egert somehow tucked in his first of the campaign. We’re just trying to find the words to describe this goal without being disrespectful.

After a crazy first period, we emerged with a 3-2 lead.

Sting forward Calvin Martin scored a sick shorthanded goal to start things off. After defenceman Nick Grima squared up for a hard shot on Pfeil, the puck rebounded out to Martin, who knew exactly what to do. At this point, we were now up 4-2.

Late in the second, Kitchener forward Jonathan Yantis potted one, and Damiani scored his second of the night. Suddenly, it was 4-4.

Thirty seconds after Damiani’s second marker, Sting overage forward Franco Sproviero fought back. Sproviero’s fifth of the season brought a hush to what had become a quickly-inspired crowd after back-to-back Rangers goals. Alexandre Hogue and Mitch Eliot recorded the apples.

In the third, we were somehow scoreless. Fittingly, we were off to overtime; and when that solved nothing, we went to the shootout.

Leufvenius and Franco Sproviero each scored in the shootout for the Sting. But the Rangers came out on top. Hugg scored the winner, giving Kitchener a 6-5 victory.

Hughes made some clutch saves for the Sting throughout the evening, stopping thirty-three shots in the effort.

We’ll see you tomorrow when we host the upstart Sudbury Wolves! Puck drop at Progressive Auto Sales Arena is 7:05 PM. Pick up your tickets below!