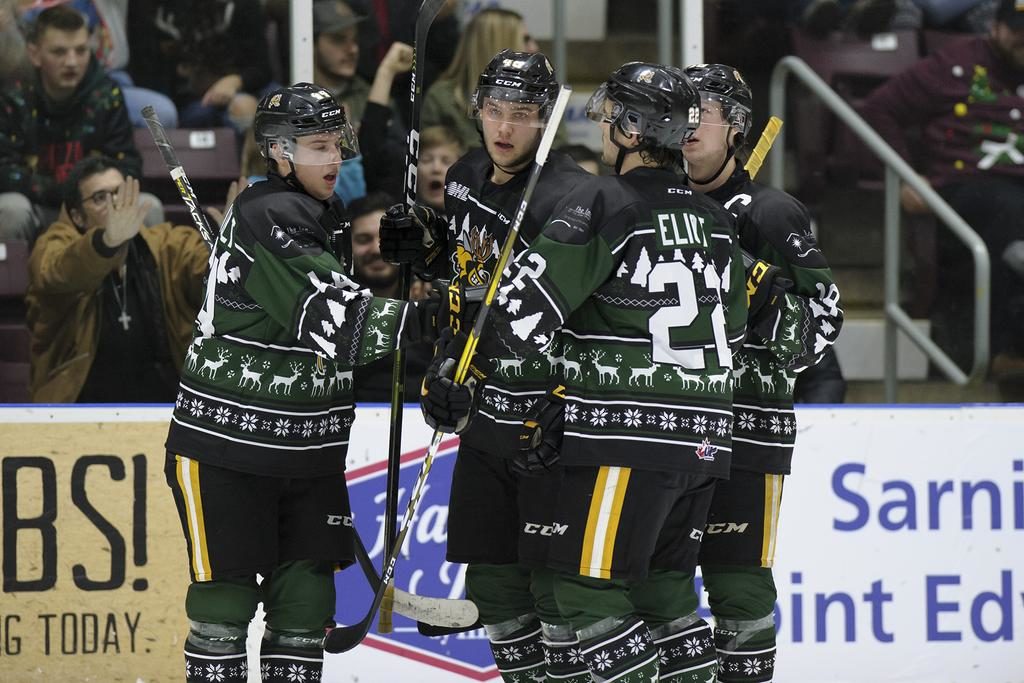 The Sarnia Sting hosted the Erie Otters on Friday evening.

It was Ugly Christmas Sweater night at Progressive Auto Sales Arena. Our themed sweaters are being auctioned off, with one-hundred percent of the money raised going towards the Inn of the Good Shepherd. We thank all our fans for generously supporting our community this holiday season.

In the first period, it took a few minutes for us to get going, but once we did, we took off soaring. And scoring.

Sting rookie forward Jacob Perreault got the party started. Perreault parked in the slot, linemate Hugo Leufvenius hit him with a pass, and Perreault buried the puck past Erie netminder Daniel Murphy.

Then, Jamieson Rees brought Sarnia fans to their feet with a dazzling goal. Rees flew threw through the neutral zone with speed, dangled the puck between the legs of an Otters defenceman, and deked out Murphy. Rees’s incredible tally gave us a 2-0 lead.

Moments later, Sting forward Calvin Martin made it 3-0. Colton Kammerer tossed the puck low towards the net, Martin gathered it, and scored his ninth of the year.

Erie forward Elias Cohen got one back, but the Sting certainly were not done yet.

Leufvenius scored his team leading twenty-first of the season for Sarnia. Perreault forced an Erie turnover before dishing to Leufvenius, who found twine. After the first period, we led 4-1. To start the second period, Erie replaced Murphy with Noah Battaglia in goal.

In the second, the Sting continued to fire away. Gera Poddubnyi scored a few seconds in, but Sarnia continued scoring only moments later.

Perreault scored his second of the night after a give-and-go with Leufvenius. 5-2.

Only a minute after, Sting forward Brayden Guy extended our lead. A hard shot from the slot gave Guy his ninth of the campaign. Just like that, it was a 6-2 game. We broke it wide open.

In the third period, it was all about Sting forward Curtis Egert. The native of Welland, Ontario recorded his first career hat trick, scoring all his goals in the final frame.

Sting defenceman Alexandre Hogue also scored in the third period. Hogue sniped on the powerplay for his third of the season.

Erie added a couple goals from Emmett Sproule and Kyle Maksimovich, but this night was all about Sarnia.

Tonight’s final score was 10-4. It was a season-high of goals for the Sting.

Ethan Langevin was tremendous in net as usual for Sarnia. Langevin turned aside twenty-seven shots on the evening.

We return to action tomorrow night in Saginaw! Puck drop at the Dow Event Centre is set for 7:05 PM. We’ll see you back at The Hive after Christmas!