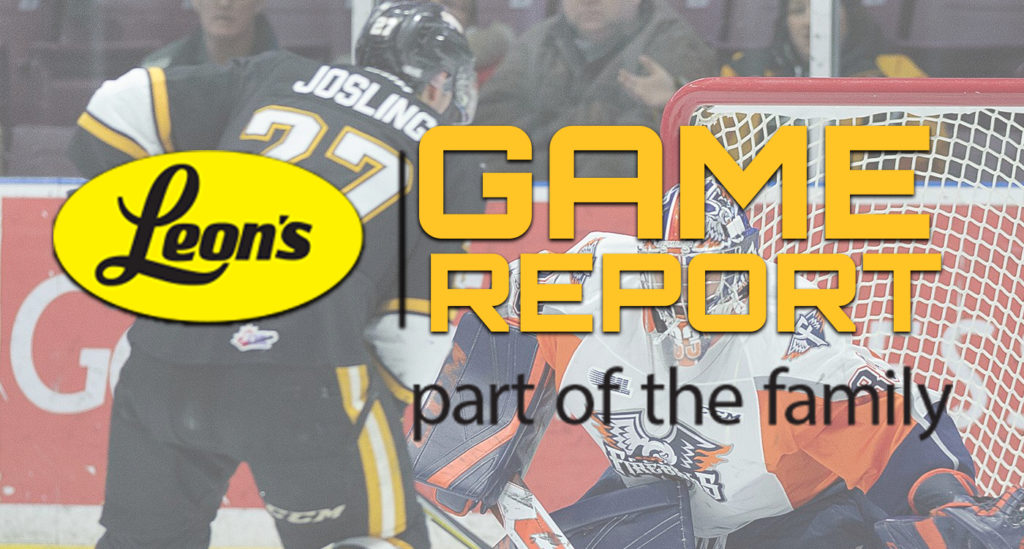 The Sarnia Sting hosted the Flint Firebirds on Friday night.

It was a dominant performance from the Sting. Peppering the Firebirds’ with thirty-seven shots on goal, the Sting popped seven goals into the Flint net.

Let’s get right to the goals.

In the first period, Jordan Ernst opened the scoring. Ernst wound up for a slapshot one-timer on the powerplay and powered it into the mesh. Firebirds’ goaltender Garrett Forrest had zero chance of stopping it.

Sean Josling has been firing on all-cylinders this weekend, and continued it tonight. Josling scored his first of two on the night midway through the first. Josling took a pass from Sting defenceman Colton Kammerer right on the doorstep. Easy goal.

In the second, Franco Sproviero displayed his typical penalty-killing magic. Sproviero picked the puck up inside his own blueline on a clear, and flew down on a breakaway. A little hesitation, a little curl, and Sproviero had his third shorthanded goal of the season.

IN GAME | @FrancliSpeaking has five goals this season. Three of them while killing penalties! Including this breakaway beauty!#SARvsFLNT #SwarmWithUs pic.twitter.com/ofFaUy0Pqp

Ryan McGregor, Josling, Sproviero, and Hugo Leufvenius all scored in the third period. Jack Wismer scored the Firebirds’ lone goal on the evening.

Rookie defenceman Ashton Reesor made his Sting debut and finished with a plus-one rating in his first OHL game.

Justin Fazio was outstanding as usual, stopping 39 of 40 shots faced.