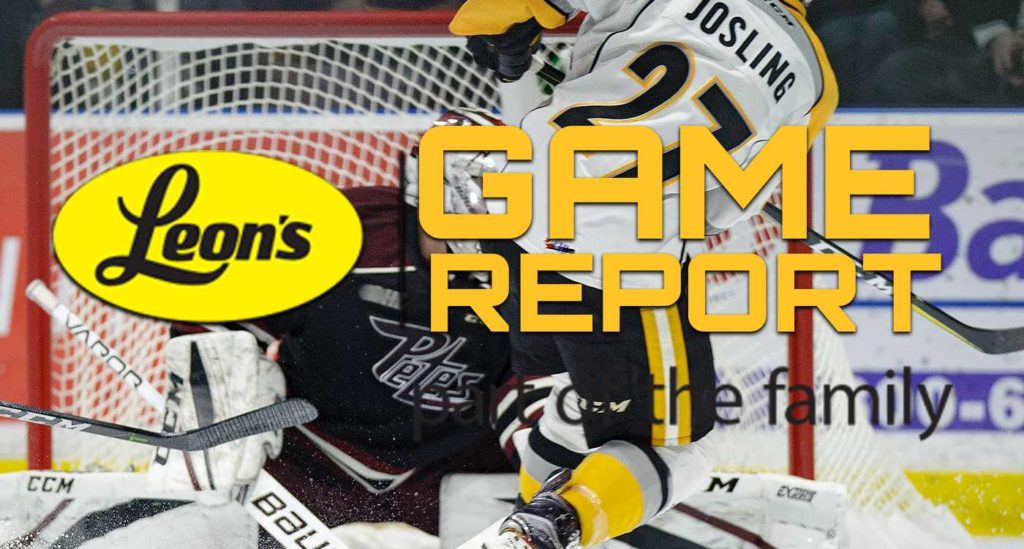 The Sarnia Sting hosted the Peterborough Petes on Saturday night.

It was the third of three games this week for the Sting, and the second of a back-to-back at Progressive Auto Sales Arena.

Coming off a clean win over the Erie Otters last night, the Sting showed no signs of slowing down.

Getting right into the action, Sean Josling returned to his old habits, scoring the Sting’s first goal of the night. Josling caught a perfectly placed pass from linemate Hugo Leufvenius. Josling did the rest, launching a wrist shot over Dylan Wells, the sprawling Petes goaltender.

In the second period, Peterborough thought they might have something going. Pavel Gogolev scored forty seconds in. But, they didn’t. The Sting bounced back immediately.

Ryan McGregor scored his ninth of the season a couple minutes later. With play four-on-four, McGregor took a long leading pass and blasted a snapshot past the Peterborough netminder.

The Sting dominated on the shot tracker tonight, and took their offensive control into the final frame.

In the third, Drake Rymsha had a goal waived off for being offside just a couple minutes in. The game remained relatively quiet, but the scoresheet did not tell the whole story. The Sting were all over the Peterborough crease night. Shots peppered the visiting team’s cage all night long. The Petes’ goalie stood tall in goal tonight, as Wells turned aside 48 of 50 shots on goal.

Sarnia wrapped up a fully-controlled evening by adding an empty-netter in the last minute. Adam Ruzicka capped the night with his twentieth goal of the season.

The final score was 3-1 for the Sting.

Justin Fazio picked up the win in net, and built the Sting’s record to 24-6-2-0 on the season.

The Sting are back in action on Wednesday right here at Progressive Auto Sales Arena. Saginaw is stopping in for a visit, and we all know why this is a game you won’t want to miss. Catch your tickets here!