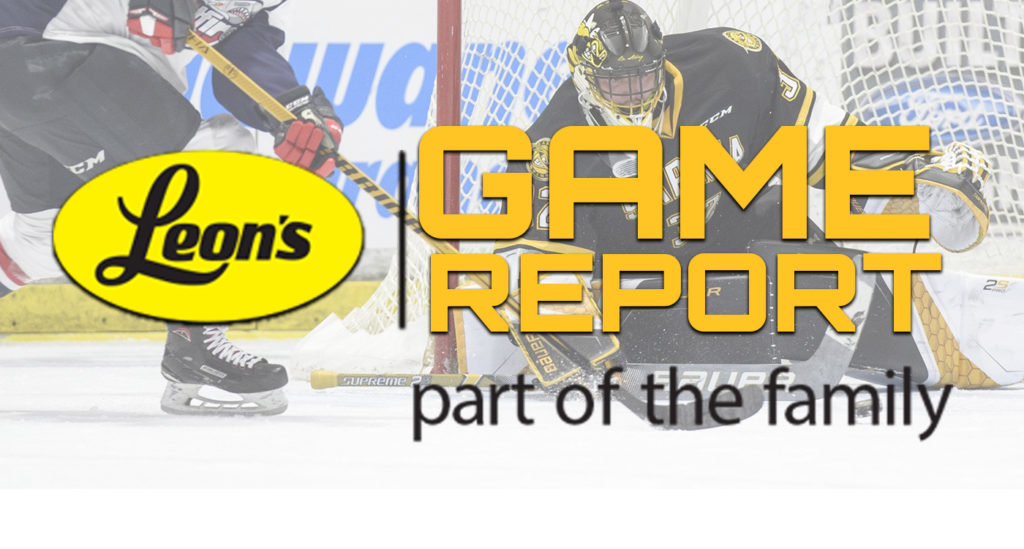 The Sarnia Sting hosted the Windsor Spitfires on Friday night in their opening game of the 2018 OHL Playoffs.

In what’s been a consistent sport theme in this month of March, there was a little bid of madness this evening at Progressive Auto Sales Arena.

Windsor took game one by a final score of 6-2. Though the Sting outshot the Spitfires forty-five to thirty, Windsor goaltender Michael DiPietro played a very strong game between the pipes. With a massive glove save on Sting forward Sean Josling just two minutes into the game, DiPietro set the tone for the remainder of the night.

In the second period, Spitfires defenceman William Sirman opened the scoring. Sirman sent a point shot through traffic, narrowly getting it past Sting goalie Justin Fazio. Windsor forward Cole Purboo added another a few minutes later, and the Spits had a 2-0 lead.

Sting forward Drake Rymsha scored our first goal of the postseason. Rymsha was kicked out of the faceoff circle to begin the play. However, sliding out to the wing, Rymsha was able to create a ton of space for himself. Rymsha’s original shot was stopped by DiPietro, but he followed up his own rebound to bury the goal. It was a 2-1 game.

IN GAME | Drake Rymsha swoops across the top and follows up his own rebound to pot the goal! #BelieveTheBuzz #SARvsWSR pic.twitter.com/j7NfeP3zMY

Windsor forward Igor Larionov II scored another tally for the Spits before the end of the second. Through two, the visiting side held a 3-1 lead.

Sting forward Anthony Salinitri brought us within a pair. Salinitri absorbed the puck to the right of DiPietro down low and tossed in a goal. Salinitri, who had ten points in six regular season games against the Spits, always comes to compete against his hometown team. Salinitri’s goal made it 4-2.

Purboo added his second of the game for Windsor, and forward Jake Smith clinched things off. Tonight’s final score was 6-2.

Fazio made twenty-four saves for the Sting in tonight’s effort.

We return to action tomorrow night! Same time, same place! We’ll see you at The Hive for 7:05 PM puckdrop!