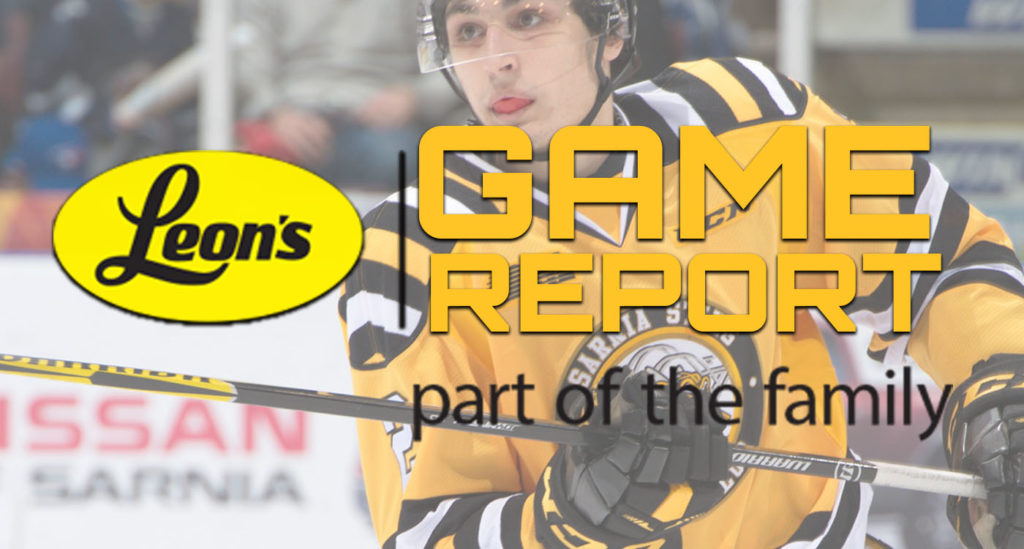 The Sarnia Sting visited the Kingston Frontenacs on Friday night.

After a well-fought victory in Peterborough the evening prior, the Sting did come out to an inevitably slower start.

The first period was scoreless, with both sides trading powerplay opportunities. Jordan Ernst was strong on the body in the opening frame, landing numerous hard checks on the Frontenacs.

Aidan Hughes started in goal for Sarnia and had a couple swift saves in the first.

In the second, Kingston went ahead with a two-goal lead. Frontenacs forward Jason Robertson scored a pair of goals to put the home side on top.

As the middle period went on, the Sting found some quick pep in their step, swarming all over the Fronts’ crease.

Ernst got Sarnia on the board at just about the midway point of the game. Ernst pulled of a silky fake slapshot, followed by a toe drag, before firing the puck past Kingston goaltender Jeremy Helvig. Ernst’s fourth goal in three games cut the Frontenacs lead to 2-1 heading into the final period.

In the third, Kingston once again scored twice early, with goals coming from forwards Ryan Cranford and Tyler Burnie. Nathan Dunkley redirected another goal a few minutes later, and the Fronts had a three goal lead. Cranford and Jacob Paquette scored again just before time expired, and Kingston was able to end the Sting’s incredible fourteen-game win streak.

The final score was 7-1 in favour of the Frontenacs.

The Sting are back in action on Sunday afternoon against the Ottawa 67’s. Sarnia rounds out their three-game weekend with a stop at the TD Centre in the nation’s capital. Game time is 2:00 PM.