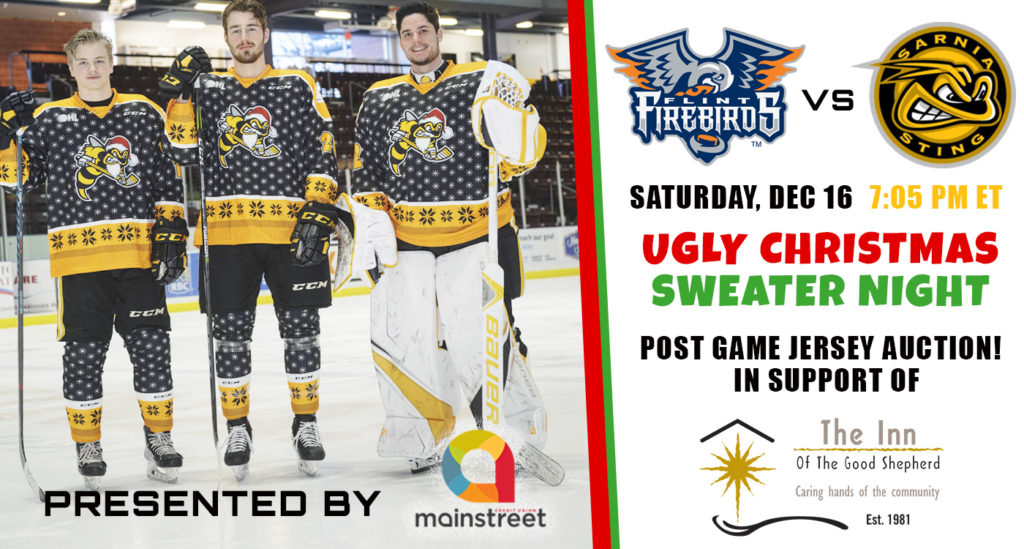 The Sarnia Sting hosted the Flint Firebirds on Saturday. It was our third annual Ugly Christmas Sweater Night in support of the Inn of the Good Sheppard. The Sting wore specially themed sweaters for the occasion. Good cheer was found throughout Progressive Auto Sales Arena all night long.

Maurizio Colella added another one for the Firebirds in the first, and Ty Dellandrea scored forty-nine seconds into the middle frame. But, good fortune would soon change.

In the late second, it was comeback time.

With less than four minutes left in the frame, Sting defenceman Theo Calvas scored a high-flying goal, coming soaring in on the Flint crease. Clearly inspired by the spirit of the holiday season, Calvas emerged from his usual defensive perch and cruised with power down the middle of the ice. Franco Sproviero hit him with a pass, and Calvas redirected the puck right by Firebirds goaltender Garrett Forrest.

Just thirteen seconds later, Sting forward Anthony Salinitri popped another one. After a big evening the night prior in London, Salinitri was back at it again. Tonight’s goal brings Salinitri to fifteen on the season.

In the third, the Sting were all over the Firebirds’ goal, but they couldn’t quite match with the equalizer.

Fazio stopped 35 of 38 shots against in goal. Fazio made some crucial saves throughout the game, including a tremendous breakaway stop on Firebirds forward Jake Durham late in the third.

Our team is now on Christmas break until December 28. We return to action against the Windsor Spitfires for a Thursday night game right here at Progressive Auto Sales Arena. Make sure to pick up tickets for all your Sting games by clicking here.

The club extends the best of luck to Sting forwards Jordan Kyrou and Adam Ruzicka in the 2018 World Junior Hockey Championship. Kyrou will represent Canada, and Ruzicka will represent Slovakia. We know they will make us proud.

The entire Sarnia Sting Hockey Club would like to wish all our fans a terrific holiday season.