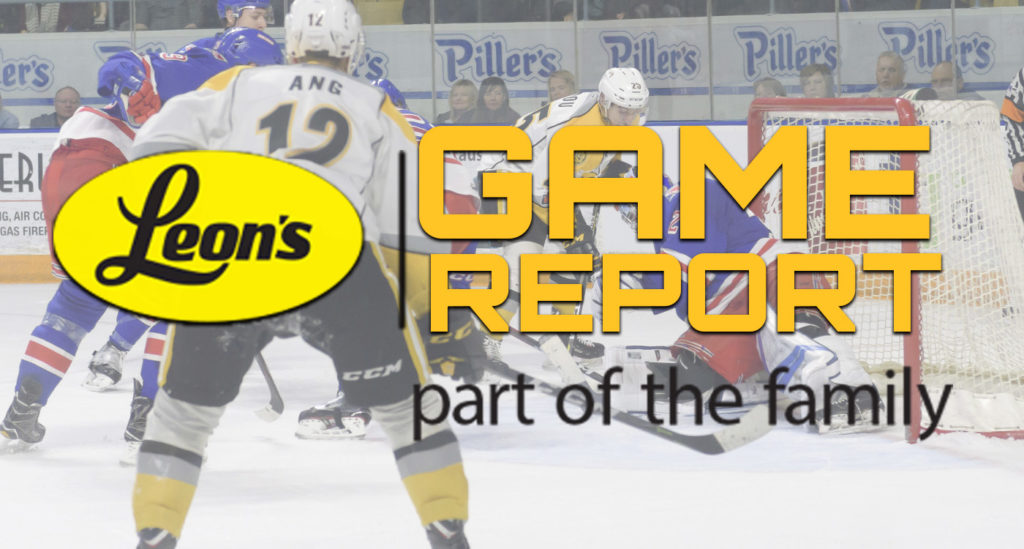 The Sting visited the Kitchener Rangers at The Aud Friday night for the some Round 2 action. The powerhouse line of Hugo Leufvenius – Ryan McGregor – Sean Josling looked to continue the dominating play after a huge round 1 performance. The long-anticipated match-up was ready to begin.

The puck was dropped at The Aud and the Western Conference Semi-Final was underway. After back and forth play to start the period, the Sting penalty kill went to work early going 2/2 with Justin Fazio coming up with some huge saves to keep the game scoreless. Midway through the first, the Sting looked to pressure, throwing many high-quality scoring chances at Culina. As the buzzer sound to end the first, the game was still scoreless.

As the second started, the Sting put the early pressure on the Rangers. After some more back and forth plays, the Sting converted on a mistake after Culina misplayed the puck behind the net. A streaking Ryan McGregor reading the play perfectly put the puck in the empty net to give the Sting a 1-0 lead. Ranger’s Garreffa answered quickly with the equalizer. After a flurry of penalties for both teams, the second came to an end with the score still deadlocked at one apiece.

The Sting were looking for a big third to take the lead. On a breakaway to the net Franco Sproviero was hauled down by a Rangers defense and was awarded a penalty shot. Sproviero was unable to convert and the game was still tied at one. A minute late, Ranger’s Stanley rang the puck off the crossbar and Bunnaman was able to put the rebound passed Fazio. After a long review, the play was ruled a goal and the Rangers took at 2-1 lead. The Rangers quickly added another tally from a Stanley slap shot to take a 3-1 lead. Ranger’s Sherwood would add an eventual insurance goal a few minutes later to take a 4-1 lead. The Sting then regained momentum and Theo Calvas was able to solve Culina with his shot from the point cutting the lead to two with six minutes remaining in the game. Unable to convert with the extra attacker and Fazio to the bench, the Sting dropped Game 1 on the road.

The Sting look to take Game 2 as it goes on Sunday at The Aud in Kitchener, 7:00 pm puck drop.

Secure your Game 3 and 4 tickets at the Hive by clicking here!