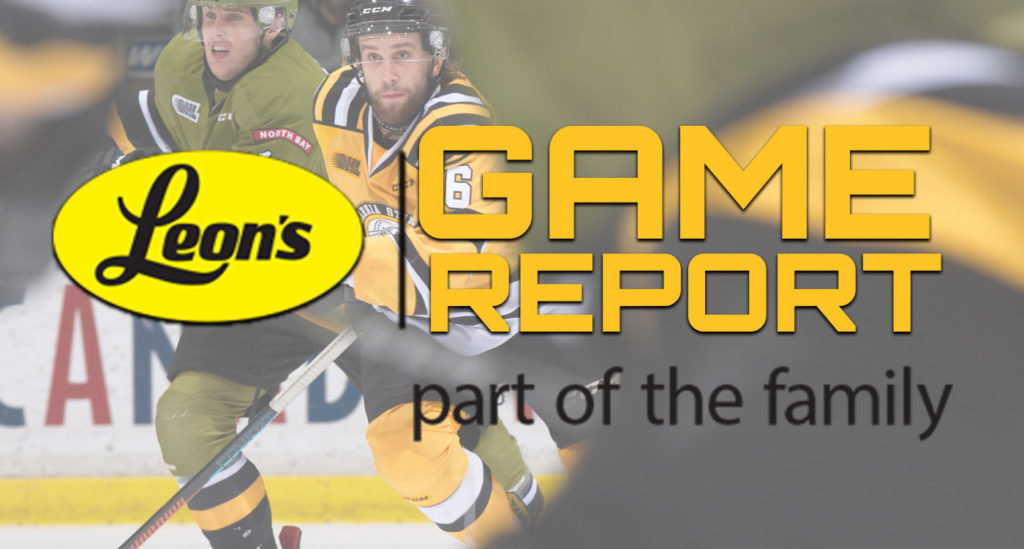 With the Sting on a five-game win streak, the Troops were determined to player spoiler tonight. Sarnia fell 3-2 to the men in green in a game that saw North Bay’s goalie make timely saves to seal the win.

In the first, Sean Josling kept doing what he usually does: scoring goals just seconds into the period. It only took 45 seconds tonight for Josling to give the Sting a 1-0 lead. Following a Ryan McGregor rush towards the goal, Josling scooped up the loose puck, spun around, and wired one past Battalion goaltender Julian Sime. Things looked good for the home side early.

IN GAME | @seanjosling spins and puts the Sting up 1-0 on North Bay! Just 45 seconds in!#SwarmWithUs pic.twitter.com/nDkHFkFpJH

North Bay tied the game with a few minutes left in the opening frame. Justin Brazeau, the Battalion’s leading scorer, potted a strange one. Brazeau drove towards Sting goalie Aidan Hughes from a tight angle, tossed the puck on net, and it somehow redirected into the mesh.

In the second, the Battalion had the lone goal. Luke Burghardt scored after a Sting turnover in front of Hughes.

Brady Hinz came back with a quality scoring chance just a few minutes later. Hinz fired a one-timer on Sime from high above the right circle, but Sime extended out with his right pad to make the save.

Adam Ruzicka then had a big chance of his own, streaking in on Sime after a perfect setup from Sting captain Jordan Kyrou. Though the Sting were putting pucks on goal, the North Bay netminder made the saves he had to make.

In the final period, Hughes continued to make strong stop after strong stop. Hughes made a real tricky save on Brazeau as the Battalion big man crashed the crease with speed.

Hugo Leufvenius had a dandy chance early in the period. The Sting’s big power forward was narrowly stopped by a sprawling paddle save by the North Bay goalie.

Just past the ten-minute mark, Brett McKenzie scored to give the Battalion a 3-1 lead. McKenzie stripped a Sting defenceman on Sarnia’s blueline and went in alone on Hughes. The Sting netminder actually made a handful of breakaway saves on the evening, but McKenzie was able to get this one through.

Sting forward Ryan McGregor narrowed the deficit to within one with four minutes remaining. After a point blast from Franco Sproviero, McGregor scooped up the loose puck and shoveled it past Sime.

Though the Sting were swarming at the end of the third, they ran out of time on this night. North Bay picked up the victory, handing the Sting just their fifth regulation-time loss of the season. The loss brings the Sting’s record on the season to 21-5-1-0.

Sarnia is back in action tomorrow night in Saginaw. The boys will look to bounce back against the Spirit at the Dow Events Centre. Puck drop is 7:05 PM.

Join us on Sunday afternoon for the Sting’s annual Teddy Bear Toss! It’ll be a huge afternoon matchup against the Oshawa Generals right here at Progressive Auto Sales Arena.

Make sure to join us on Sunday by purchasing your Sting tickets right here!