GAME REPORT: Sting Drop Bulldogs 6-5 to Win Fifth in a Row on Thanksgiving 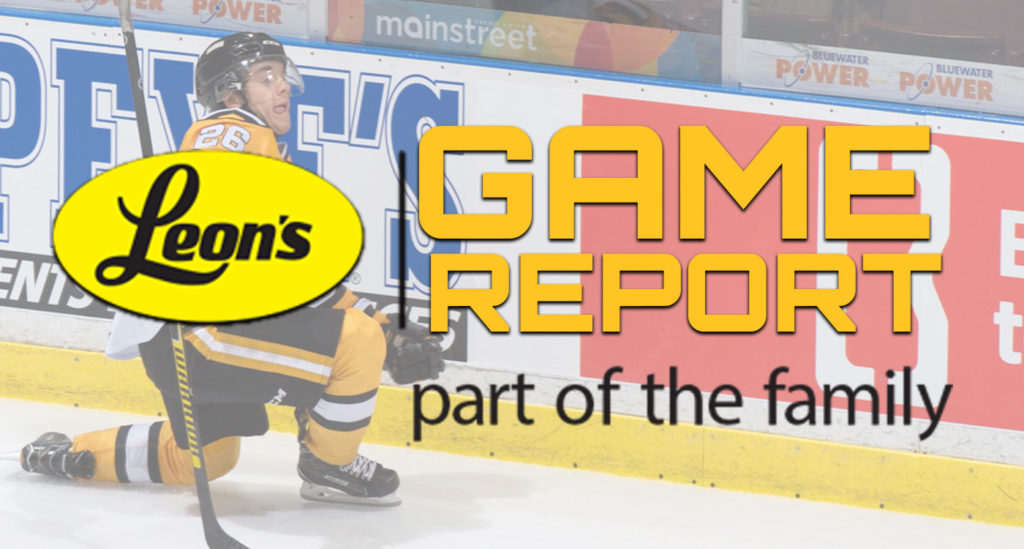 It would prove to be a real treat for all the fans in attendance.

Brady Hinz opened the Sting’s scoring for the second straight game. With Hamilton a man down on a too-many-men penalty, Hinz would capitalize on the powerplay. Jordan Ernst set up Hinz with a perfectly placed pass into the slot. Hinz had his first shot attempt blocked, but on his second effort he would put the puck past Bulldogs goaltender Kaden Fulcher. It was Hinz’s fourth goal of the season.

Just three minutes later, Anthony Salinitri would score another one for the Sting. Defenceman Kelton Hatcher fired a hard point shot off the end boards and it bounced right back out front. Salinitri was there to pounce, sending the puck over Fulcher’s glove and into the net.

The Sting would then find themselves with a five-minute powerplay. Hamilton rookie forward Navrin Mutter was assessed a game misconduct for slewfooting Sting defenceman Nick Grima.

Jordan Kyrou would score with the resulting man advantage. Kyrou created space in open ice, the puck slid over, and the Sting captain went top shelf.

Rounding out the first period scoring with an exclamation point, Sean Josling would fire a snapshot bardown past Fulcher. It was Josling’s first goal of the season. Brayden Guy drew an assist on the play, marking his first point in the Ontario Hockey League.

It was 4-0 Sting through the first period.

Hamilton would score two quick ones five minutes into the second. Isaac Nurse would get the Bulldogs on the scoresheet for their first of the game. Thirty seconds later, Connor Roberts got another one for the visitors. All of a sudden, it was 4-2.

Ryan McGregor and Franco Sproviero would team up to swing the momentum back in the Sting’s favor. McGregor earned himself a shorthanded goal after Sproviero gathered the puck in Sarnia’s zone, led a rush up ice, and set up McGregor for an easy redirect into the Hamilton net. It was one of three Sproviero assists on the afternoon. Call it 5-2.

The Bulldogs received another powerplay shortly after, scored, and brought themselves back within two.

To start the third, Hamilton would score once more on the powerplay, and it was a 5-4 game. Not long after, Nurse would add his second of the day, and we had ourselves a tie game going down the home stretch.

With the score knotted at 5-5, it was off to overtime.

Adam Ruzicka would be today’s hero for the Sting. Ruzicka separated from a Hamilton defenceman, cruised by, and buried the puck past Fulcher. It capped off a crazy afternoon of scoring.

Justin Fazio recorded his fifth win of the season between the pipes.

The Sting are back in action on Friday, October 13, with a home game against the Mississauga Steelheads. Game time is 7:05 PM right here at Progressive Auto Sales Arena. Tickets for all Sting home games can be purchased at the box office or by clicking here.