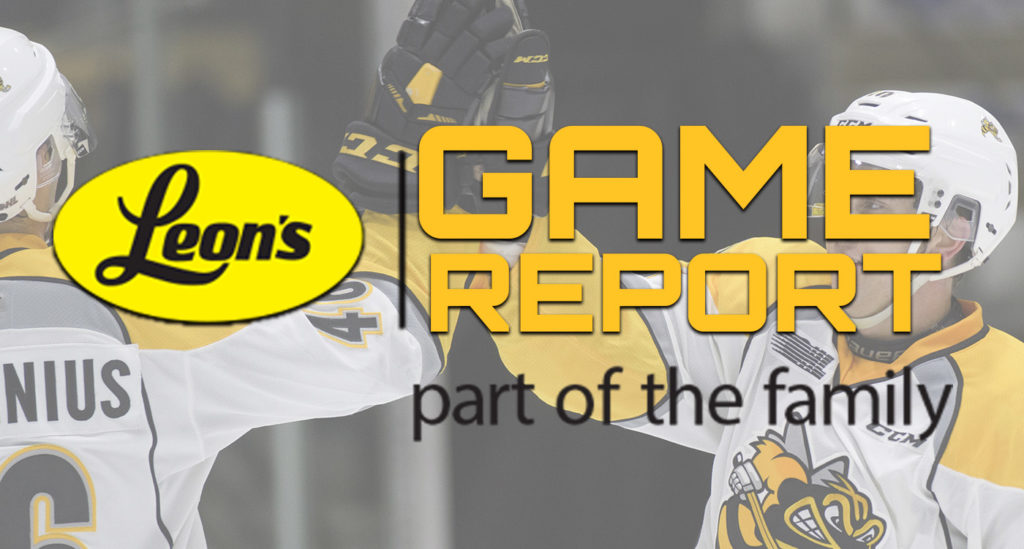 The Sarnia Sting played host to the Barrie Colts on Friday night.

Before the game, the Sting were proud to honour Olympic gold medalist Derek Drouin. A native of nearby Corunna, Ontario, Drouin is the reigning world champion in high jump, winning gold at the 2016 Rio Olympics.

Drouin took part in the ceremonial opening faceoff, spent time meeting with fans, and signed autographs throughout the evening.

Thanks @ddrouin10 for joining us for tonight's game & congratulations again on the gold! #local #Pride #SARvsBAR pic.twitter.com/8g1jM1XPjr

On the ice, Sting forward Adam Ruzicka continued his torrid start to the season, opening the scoring just a minute into the game. Rookie defenceman Colton Kammerer made a heads-up play at the blueline to keep the puck in the offensive zone, rolling the puck towards the net. Ruzicka did the rest, sending the rubber through Colts goaltender Leo Lazarev.

Strong offensive chances from Brayden Guy, Sean Josling, and Drake Rymsha would keep the Sting looking confident as they headed to intermission.

In the second period, the Sting would take a quick 2-0 lead. Jordan Ernst scored his sixth goal in six games. Following some strong work on the side wall by Ryan McGregor, defenceman Nick Grima took a hard point shot that created a juicy rebound off Lazarev’s right pad. The puck kicked directly out to Ernst, who had all kinds of time and space to capitalize.

The Sting would spent much of the middle frame shorthanded, but goaltender Justin Fazio continued to be a wall in the crease for Sarnia.

In the third, the Sting extended their lead. Theo Calvas scored his first goal of the season on a point shot that deflected off the stick of a Barrie forward and right into the net. Calvas, known primarily as a defensive defenceman, made it his second career OHL goal. Franco Sproviero was a key contributor on the play. Sproviero was just finishing off an outstanding penalty killing effort, and earned the goal’s lone assist.

Barrie would get on the board with five minutes left in the third, but it wouldn’t be long before Sarnia came back with another one.

The Sting would restore their three goal lead just two minutes later, as Ruzicka would add his second of the game. It came as his second straight two-goal effort, and sealed the win. Ruzicka has six goals in six games to begin the campaign.

Jamieson Rees, Sarnia’s first-round pick in the 2017 OHL Priority Selection, picked up an assist on the Ruzicka goal. It marked Rees’s first career point in his OHL debut.

Justin Fazio recorded his fifth victory of the year in between the pipes. Thanks to strong shorthanded work and some timely Fazio saves, Sarnia finished the game a perfect eight-for-eight on the penalty kill.

The Sting are back in action on Monday, October 9, with a home game against the Hamilton Bulldogs. Game time is 2:00 PM right here at Progressive Auto Sales Arena. Bring the family and join us for afternoon Sting hockey on Thanksgiving Monday. Tickets for all Sting home games can be purchased at the box office or by clicking here.