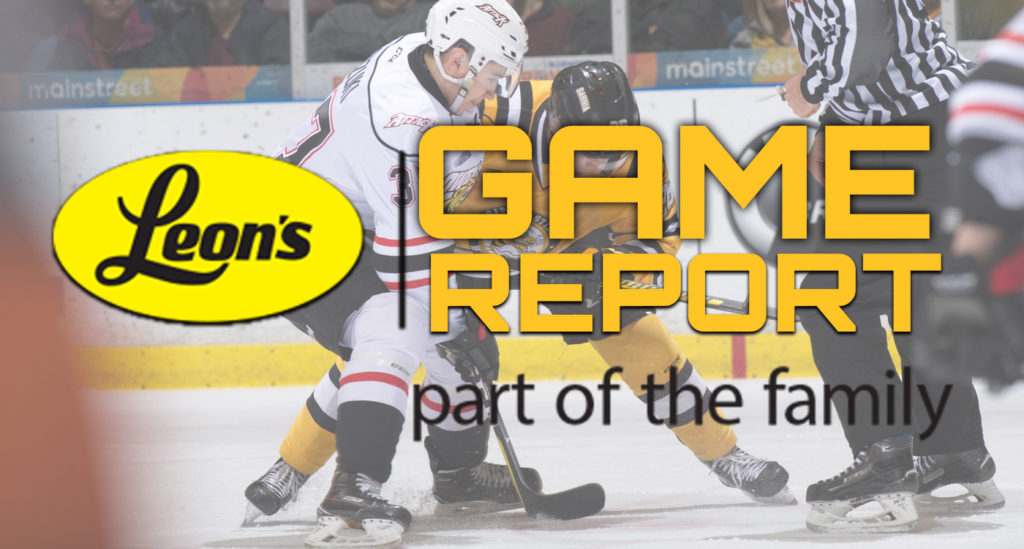 Justin Fazio was a very busy man on Wednesday night.

The Sarnia Sting visited the Owen Sound Attack and emerged with a wild 6-5 shootout victory. When we say wild, we mean that if you hadn’t seen it before, you probably did for the first time tonight. You won’t often see a goalie give up five goals on the road and have everyone in the rink saying, “Wow, he was outstanding.”

From the drop of the puck, it was clear this game was going to be tight. Owen Sound emerged with a 1-0 lead after the first period. Attack forward Nick Suzuki flew in off the right wall, through the Sting crease, and slid one past the Sting goaltender Fazio.

Sarnia defenceman Colton Kammerer was a force on the ice for the Sting in the opening frame. Kammerer delivered two major open ice hits, first on Attack forward Aidan Dudas and then on Sean Durzi a few minutes later.

The Sting have been a very good second period team so far this season. Coming into this week’s games, they had scored eight second period goals and only given up one against. It was no different tonight.

Ruzicka would score a highlight reel goal of his own four minutes later. The newly-drafted Calgary Flames prospect gathered the puck inside the Sting zone, skated like a rocket through three Owen Sound skaters, past centre ice, and shot hard and low by Guzda. Approximate total flight time for the goal: a little over three seconds.

After Fazio held down the fort on an Attack penalty shot attempt, Sarnia would strike again.

Sting captain Jordan Kyrou showed off a burst of acceleration, had an Attack defender all over him, and still managed to soar in and shovel a goal past Guzda.

Owen Sound forward Maksim Sushko would score shortly after, but the Sting weren’t done yet.

Sarnia forward Jordan Ernst would create an end-to-end breakaway off a faceoff in the Sting zone. Ernst skated alone all the way down the ice and went high-glove on the Attack netminder.

The Attack would respond a minute later. Suzuki added his second of the game on an Owen Sound powerplay.

After a wild second period, the Sting entered the intermission with a 4-3 lead.

Zachary Roberts would score for Owen Sound to start the third. The puck had deflected and floated high, and Roberts snuck one by Fazio.

Never one to be outdone, Ruzicka would score again for the Sting midway through the third. Sarnia was on the powerplay and Guzda had lost track of the puck for Owen Sound. Ruzicka was all over it, sending one past the Attack netminder, giving the Sting a 5-4 lead.

Owen Sound would score a controversial goal less than a minute later. Fazio was knocked over in front of his crease and was in visible distress on the ice. Play continued with no whistle for another ten seconds, and Attack forward Matthew Struthers scored on a net that had no goalie.  It tied the game at 5-5.

Recovering and rising back up, Fazio stood on his head in the third period. The Attack were generating chances left, right, and centre, but Fazio stood strong.

With the way things had gone back and forth all night long, it was inevitable the game would go the distance. Fazio was under fire again in overtime as the Attack attempted to close the game out on the powerplay. They could not. Fazio finished regulation with 35 great saves on 40 shots against.

In the shootout, Fazio would stop every Attack skater he faced. Kyrou, known as one of the best shootout talents in the league, scored the winning goal for the Sting.

Fazio picked up his third win of the year, and Sarnia moves to 4-1-0 for the season.

The Sting are back in action this Friday, October 6, against the Barrie Colts. Game time 7:05 PM right here at Progressive Auto Sales Arena. Tickets for all Sting home games can be purchased at the box office or by clicking here.