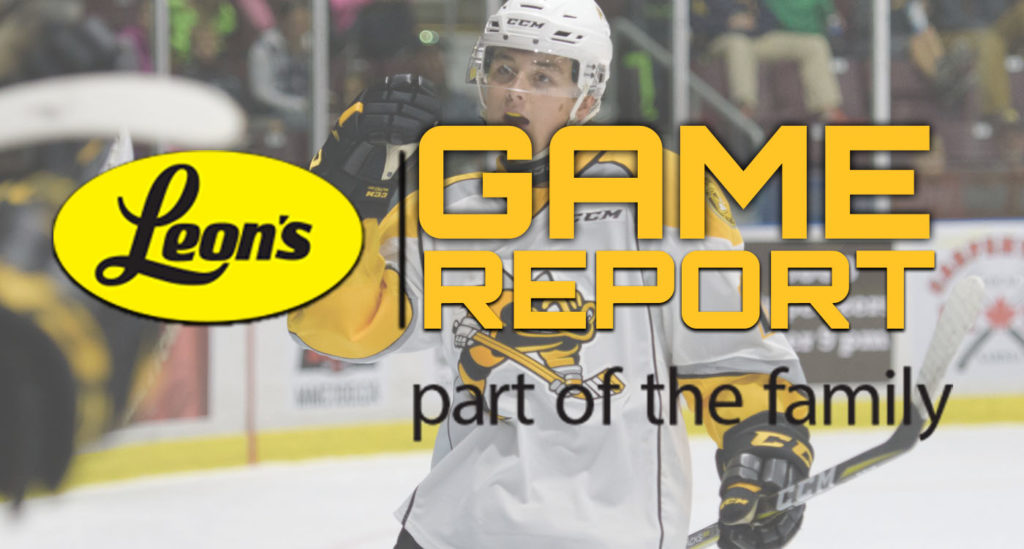 The Sarnia Sting hosted the Ottawa 67’s on Sunday for a matinée at Progressive Auto Sales Arena.

It was a strong all-around game for Sarnia. The Sting would dominate on the cycle throughout the afternoon. Ottawa would get the game’s first goal, however, on a Tye Felhaber wrist shot that got by Sting netminder Aidan Hughes.

Hughes would bounce back immediately, making some clutch saves on a Sting penalty kill just a few minutes later.

Thanks to Hughes’s strong effort between the pipes, the Sting would kick it into gear.

Ryan McGregor scored his first goal of the season to start things up for the Sting. McGregor and Anthony Salinitri broke into the Ottawa zone on a two-on-one. Salinitri sent a cross-ice pass over to McGregor, who would shoot, collect his own rebound, and pot the puck past 67’s goaltender Olivier Lafreniere.

Less than a minute later, Sting forward Brady Hinz redirected a Kelton Hatcher point shot into the back of the net. Just like McGregor, the goal was Hinz’s first of the year.

In the second period, the Sting would continue their trend of scoring in bunches.

Drake Rymsha scored his third goal of the season midway through the frame. Rymsha has had a hot start to the season, and has been showing some tremendous chemistry with linemate Jordan Kyrou. On this occasion, Kyrou intercepted a 67’s pass as Ottawa tried to regroup out of their own zone. Kyrou held the puck long enough to draw in Lafreniere before lifting a pass over to Rymsha, who scored on a wide open cage.

One minute later, Hinz scored his second goal of the afternoon. Hinz used an Ottawa defenceman as a screen, and went top shelf on Lafreniere.

And once more, a minute after Hinz’s second tally, Sting forward Jordan Ernst would fire a long wrister high and hard past the Ottawa goaltender. The 67’s would then decide to change netminders, bringing in Olivier Tremblay between the barber poles.

In the final frame, Ernst added another one, redirecting a McGregor pass through the 67’s netminder. With the goal, Ernst is up to four on the season and has scored in each of Sarnia’s home games.

Ottawa would get one back, but it was all Sting, all afternoon.

Kyrou would cap the game off with his first goal of the season, assisted by Theo Calvas and Rymsha.

Hughes picked up the win in goal for Sarnia, in this his first start of the season.

The Sting are back in action on Wednesday, October 4 with a road game against the Owen Sound Attack. Puck drop is 7:00 PM at Harry Lumley Bayshore Community Centre.

On Friday, October 6, the Sting host the Barrie Colts. Game time 7:05 PM right here at Progressive Auto Sales Arena. Tickets for all Sting home games can be purchased at the box office or by clicking here.