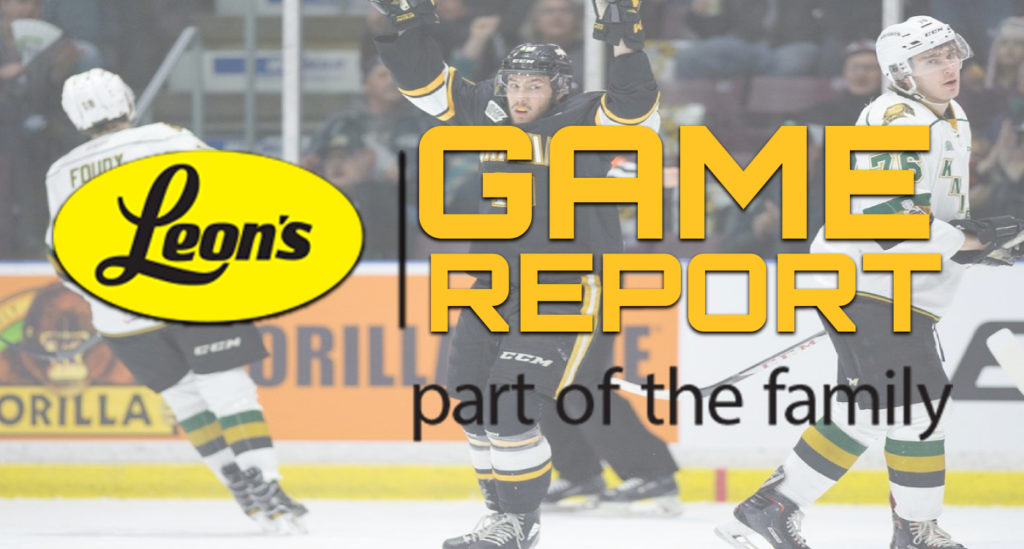 The Sarnia Sting hosted the London Knights on Saturday afternoon.

As the feature game of Sportsnet and NHL Network’s CHL Saturday Showcase, there were a lot of eyes watching this one. In front of an absolutely jammed Progressive Auto Sales Arena, another classic Battle of the 402 was on display.

In the first period, the Sting began the game with an early powerplay advantage. When rookie forward Jamieson Rees was hauled down on a rush, Sarnia had the game’s first edge. Though they couldn’t capitalize on this one, the message was clear: game on.

Knights veteran forward Alex Formenton got London on the scoresheet. A shorthanded goal got past Sting goaltender Justin Fazio, and gave the visiting side a 1-0 lead.

With the jitters of playing in front of a national television audience having now evaporated, the Sting began to roll. Three massive hits by Curtis Egert, Kelton Hatcher, and Michael Pezzetta brought some new energy into an already fired up rivalry.

Sting forward Drake Rymsha made the chess match’s next move. Battling hard along the wall to the right of Knights goalie Joseph Raaymakers, Rymsha pulled out the puck with a sweet toe drag and went top shelf into the cage.

IN GAME | Drake Rymsha has 24 goals on the season thanks to a little toe drag action and this top shelf snipe!#SARvsLDN #SwarmWithUs pic.twitter.com/gcdOkEYuXT

In the second period, the Sting took over.

Sarnia forward Anthony Salinitri scored his fourth goal in the last three games. With two goals on Thursday in Windsor, and one last night in Flint, Salinitri added his twenty-second of the season this afternoon.

Moments later, Sting goal-scoring leader Adam Ruzicka buried his thirty-first of the year. Ruzicka charged in to the left of Raaymakers, swooped around the net, and finished strong with a powerful wraparound move. It made the game 3-1.

Before the end of the second, Sean Josling tallied another one for Sarnia. Josling picked up his eighteenth of the year when he decided to go with the flow of the puck. With the disc rolling on its side, Josling whacked at it, sending a knuckler into the London mesh. Through two periods, the Sting led 4-1.

In the third, the Sting continued to control the pace of the action.

Hugo Leufvenius extended the lead to 5-1 with a top shelf snipe. Set up by Franco Sproviero, Leufvenius ended what has been a slight goal drought for the first-year forward. Based on his celebration, it’s clear Leufvenius was pretty happy about this one.

Fazio picked up the win between the pipes. With his twenty-ninth victory, Fazio is now tied for the most wins in a single season by a Sting goaltender.