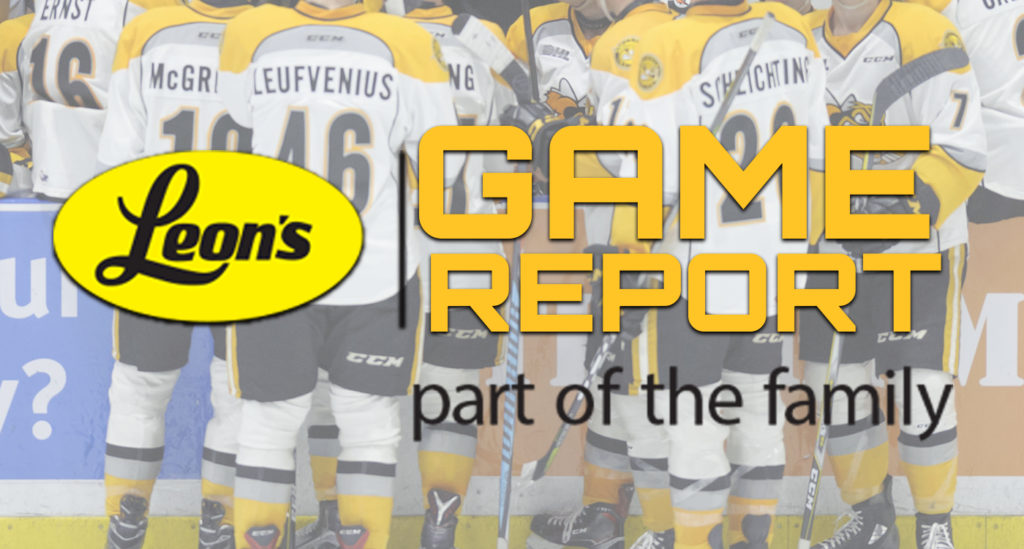 The Sarnia Sting visited the Saginaw Spirit on Saturday night.

It was the fourth meeting of the division rivals this season. Though the Spirit took the first three, tonight it was all about Sting hockey.

The first period had a few split powerplay opportunities. Both Sting goaltender Justin Fazio and Spirit goaltender Evan Cormier stood strong. Fazio made a remarkable diving save following a wild scramble in his crease. With both netminders holding up their forts, the opening frame was scoreless.

In the second, the goals started coming in hot. Sting forward Franco Sproviero got things going with his third goal in the last two nights. It was Sproviero’s seventh of the season. Sproviero trailed in across the blueline, took a sweet dish from Jordan Ernst, and fired past the Spirit goalie.

Spirit forward Jake Goldowski replied with a quick goal, but the Sting were right back at it moments later.

Ryan McGregor decided he wanted to go top shelf, so he did. McGregor took an assist off the stick of linemate Hugo Leufvenius, was in free on the Saginaw goalie, and popped the puck in under the bar.

Cole Coskey replied for the Spirit once again. That made it three goals in three minutes. But the Sting weren’t done.

In the third, McGregor scored his second of the game and twelfth of the season.

Sting defenceman Connor Schlichting scored a highlight-reel goal midway through the final frame. Schlichting gathered the puck on the Sarnia blueline, went coast-coast, split the Spirit defenceman, and finished the play off by wristing the puck in the mesh. It was a beauty. Check it out below.

IN GAME | So, @Schlickk1 just went coast-to-coast in about three seconds, split the defence, and buried it… pic.twitter.com/Gro2unBfrz

Ernst completed the night with an empty-netter. Finishing off the weekend in style, the Sting left Saginaw with a smooth 5-2 road victory.

Fazio finished with 32 saves and earned his twenty-third win of the year.