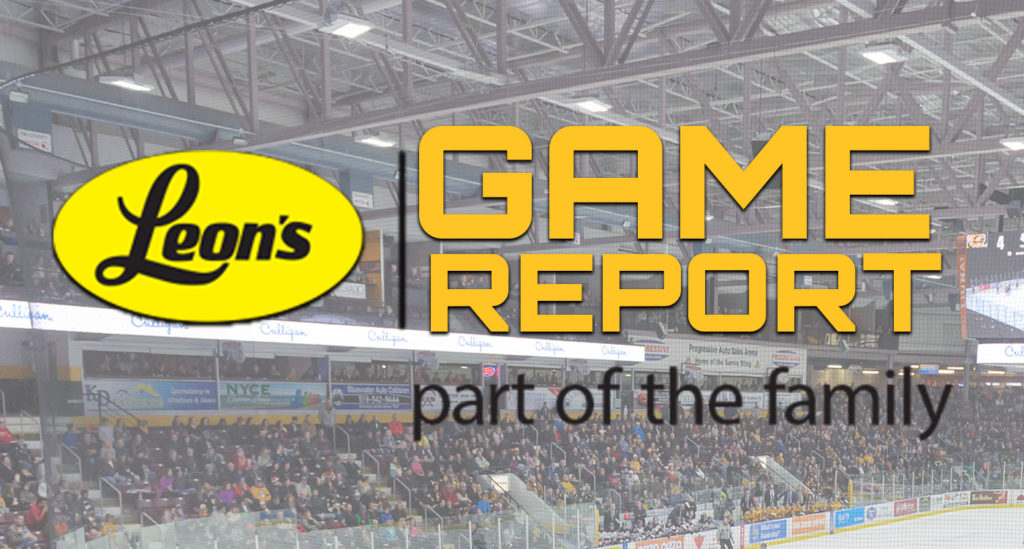 Despite some differences on the lineup sheet, there was a hockey game to be played. Let’s get into the action.

Attack forwards Brett McKenzie and Nick Suzuki also scored in the first. Through one period of play at the Bayshore, Owen Sound held a 3-0 lead.

In the second, Sting forward Michael Pezzetta brought the visitors within two. Attack goalie Olivier Lafreniere was caught outside his crease, and Pezzetta sent a long shot in on goal. Finding twine, it was a 3-1 game on Pezzetta’s twenty-third of the campaign.

Owen Sound forward Daylon Groulx added a single, and Jackson Doherty added a couple more for the home side. After two periods, it was 6-1.

In the final frame, the Sting made things interesting. Rookie forward Brayden Guy scored a pair, putting up his seventh and eighth goals of the season.

IN GAME | Two of your favourite dynamic freshmen, @brayden_guy9 and @_jamiesonrees, are back at it again! That's the 7th on the season for Guy!#SARvsOS #SwarmWithUs pic.twitter.com/HE1dB7CF0J

Sting forward Ryan McGregor also scored in the third for Sarnia. McGregor blocked a shot standing up just inside the Sting blueline. The puck bounced off his shins pads and up ice. McGregor hunted it down, and was stopped on the first effort, but hung with it and potted the rebound.

Attack forwards McKenzie and Suzuki each added another for the home squad. Aidan Dudas rounded things out. Owen Sound took this evening’s contest by a final score of 9-4.

Hughes stopped an astounding 47 of 56 shots faced between the pipes for the Sting.

That’ll do it for the regular season – we’ll see you at The Hive on Friday for Game 1 of the 2018 OHL Playoffs!