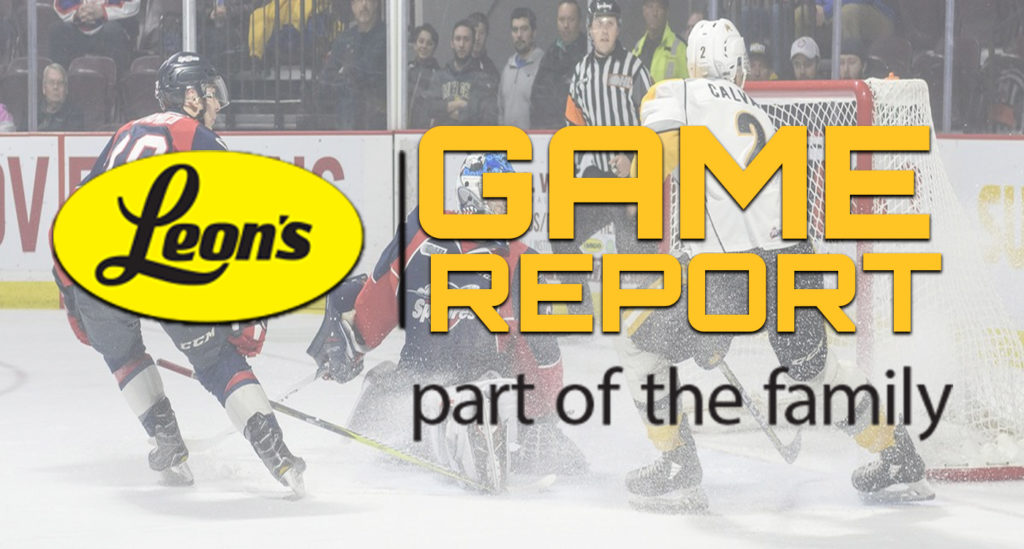 The Sarnia Sting visited the Windsor Spitfires on Tuesday night. It was game three of their first round OHL playoff series.

With the series all knotted up at one apiece, this evening’s game was crucial for both sides. Completing a comeback 5-3 win to take the series lead, the Sting performed admirably for all the fans who traveled down the road to see them.

After a scoreless opening period, things heated up in the second frame.

Sting forward Drake Rymsha scored the night’s opening goal. Rymsha and linemate Jonathan Ang flew in on a two-on-one, and Ang sent a pass towards the crease. The puck deflected off Rymsha and into the cage. 1-0.

Spitfires forwards Daniel D’Amico and Cole Purboo replied with two quick goals to put the home side ahead 2-1.

Brayden Guy dropped the mitts with Spits defenceman Grayson Ladd. Windsor’s top rookie downed Sarnia rookie Jamieson Rees with a tough hit, and Guy, a rookie himself, stepped in to take care of business. Five minutes for fighting to each Guy and Ladd. It got the Sting going.

👊IN GAME👊@brayden_guy9 knows how to stand up for his teammates! Guy drops the mitts with Grayson Ladd. Playoff hockey, baby!#BelieveTheBuzz #SARvsWSR pic.twitter.com/4yTCcKDHMf

Midway through the second, Sting defenceman Theo Calvas ignited the goal party. Calvas joined the rush and scored his first of the postseason, setup by Sean Josling.

In the third, it was comeback time.

Sting forward Hugo Leufvenius tied the game with four minutes remaining. Leufvenius gathered a swift centering pass from Josling in the slot. Josling has been stellar through the first three games and was named tonight’s first star. Leufvenius’s third of the series tied the battle at 3-3.

We return to action for game four on Thursday night! Puck drop at the WFCU Centre is once again 7:05 PM.