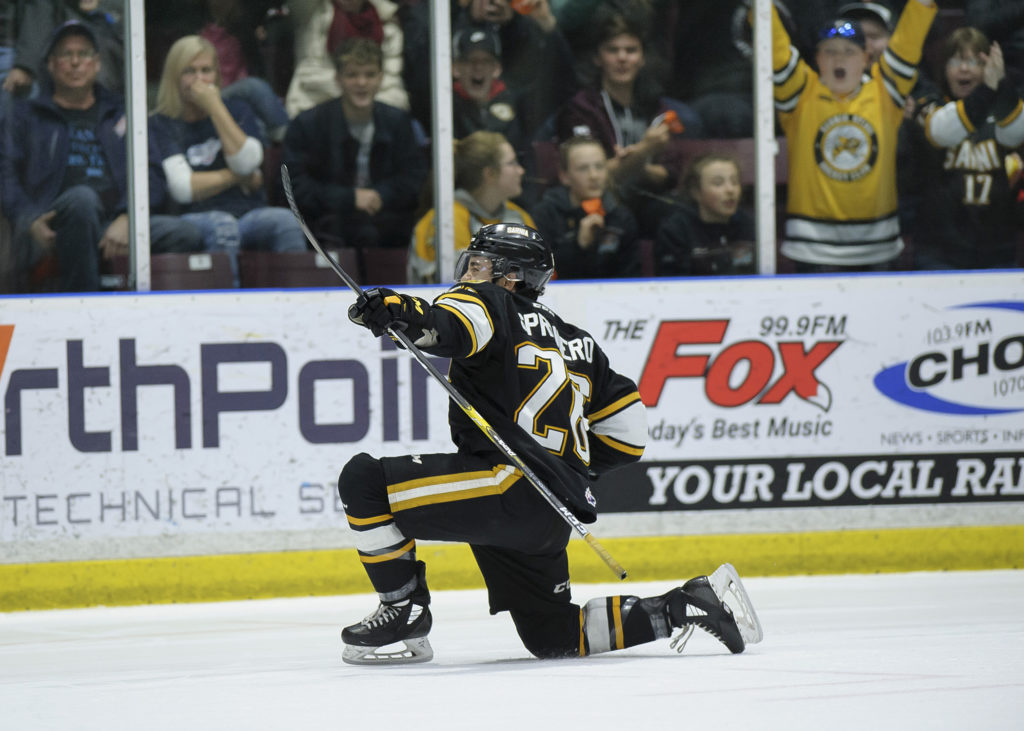 Tonight’s mission was simple: if you win, you’re in. For both teams, a victory guaranteed a playoff spot. Everything was on the line.

Before puck drop, we held a ceremony celebrating the Ontario Hockey League careers of our overage skaters, Mitch Eliot and Franco Sproviero. Those are two tremendous people with incredibly bright futures.

Sting forward Sean Josling opened the scoring. After a slick passing play with linemates Ryan McGregor and Hugo Leufvenius, Josling was the trigger man. Josling positioned himself in front of Spits netminder Kari Piiroinen and swiftly potted the goal. Josling’s twenty-second of the season made it 1-0.

Brayden Guy was next. Returning to the Sting lineup after an absence, Guy stepped right back into action. Guy whistled a hard shot from the slot through Piiroinen to double our lead. It was Guy’s nineteenth of the campaign. Through twenty minutes, we had a hard-earned 2-0 lead.

Moving into the second, the boys kept rolling. Just four seconds into an early powerplay, Eliot sniped a rocket. Eliot unleashed a wicked wrist shot from the top of the circles. The Hive was bumpin’ with a 3-0 lead.

.@mitch_eliot44 is a BIG GAME player! Eliot unleashes a cannon on the powerplay!#SARvsWSR #Canucks pic.twitter.com/Sim2oaj7Jy

Sting defenceman Kelton Hatcher brought awe to the crowd with a massive on hit Windsor forward Curtis Douglas. The Spits’ skater measures in at six-foot-nine, 250 pounds, and Hatcher laid him right out. We were feeling real good with a three-goal advantage through forty minutes.

In the final frame, the Spitfires got on the board. Jean-Luc Foudy scored a nifty breakaway goal to bring Windsor within a pair. Foudy deked Sting goaltender Ethan Langevin with a five-hole maneuver.

Spits defenceman Connor Corcoran scored midway through the third to make it a one-goal battle. We were in for a wild finish.

With six to play in regulation, Foudy scored shorthanded for his second of the game. 3-3. We were destined for overtime.

When the extra frame solved nothing, we were off to a shootout. It was time for a hero.

Who else but the local legend himself to score the winner? Sproviero scored the game-winning and playoff-securing shootout goal to send us to the postseason.

🚨PLAYOFF BOUND!!🚨@FrancliSpeaking scores to send us to the playoffs! What an INCREDIBLE night at The Hive!!#SARvsWSR pic.twitter.com/D96oOQ4JKL

Leufvenius also scored for the Sting in the shootout. Langevin shut the door. The final score tonight was 4-3 on an amazing night at The Hive.

We return to action tomorrow night in Flint! Puck drop against the Firebirds is 7:00 PM at the Dort Federal Event Center.

We’ll complete the regular season on Sunday right here at Progressive Auto Sales Arena. Flint finishes off their campaign against us with a 2:05 PM puck drop at The Hive. Tickets are available below!