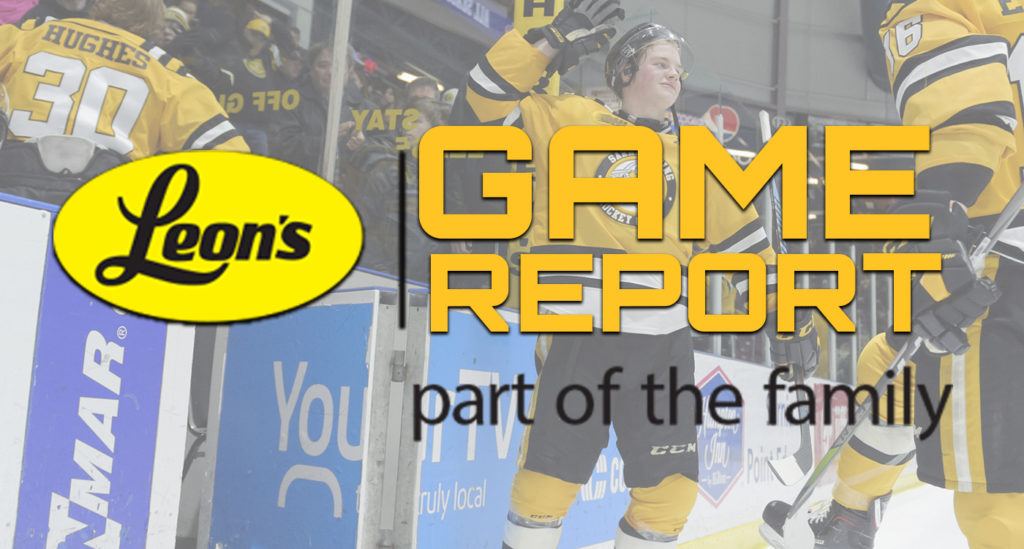 It’s about the best way to describe this rivalry. The Sarnia Sting hosted the Kitchener Rangers on Wednesday night. For the third time in two weeks, we had another heavyweight battle.

Let’s get right into the action.

In the first period, each side scored one knockdown each. Sting forward Adam Ruzicka tossed the first left. Ruzicka scored his thirty-sixth of the season after weaving through the Rangers defence and potting one past goalie Mario Culina. Sting captain Jordan Kyrou and defenceman Connor Schlichting recorded the assists on the night’s opening goal.

Rangers forward Logan Brown replied with a hard left of his own. Brown tied the game at 1-1 by going upstairs on Sting goaltender Justin Fazio. After one period of play, we were all square on the scorecard.

In the second, stop us if you’ve heard this before: Kyrou scored another highlight-reel goal. Keep an eye out for this one on TSN. Kyrou’s thirty-eighth of the year gave the Sting a 2-1 lead. It’s all over your Twitter and Instagram feeds by now.

Kitchener defenceman Logan Stanley tied the game at two before the end of the second. Off to the third.

In the final frame, the two sides would again swap heavy shots. Kitchener took the lead five minutes in when Kole Sherwood scored for the Rangers. But, not so fast.

Sting forward Anthony Salinitri comes to play in the big moments, and he came through again tonight. Salinitri took a pass in front from linemate Hugo Leufvenius and tipped in the game-tying marker. 3-3.

With overtime solving nothing, it was off to the shootout.

In the skills competition, Drake Rymsha and Jordan Ernst each scored for the Sting. Fazio shut the door in goal, and Sarnia took this one by a final shootout score of 4-3. For the Sting, they’re now up to 45 wins on the season.

Fazio stopped 30 of 33 shots faced in between the pipes to pick up the victory.

The Sting return to action on Friday in London. Puck drop at Budweiser Gardens is 7:30!