GAME REPORT | Sting Advance to Second Round, Eliminate Spitfires in 6 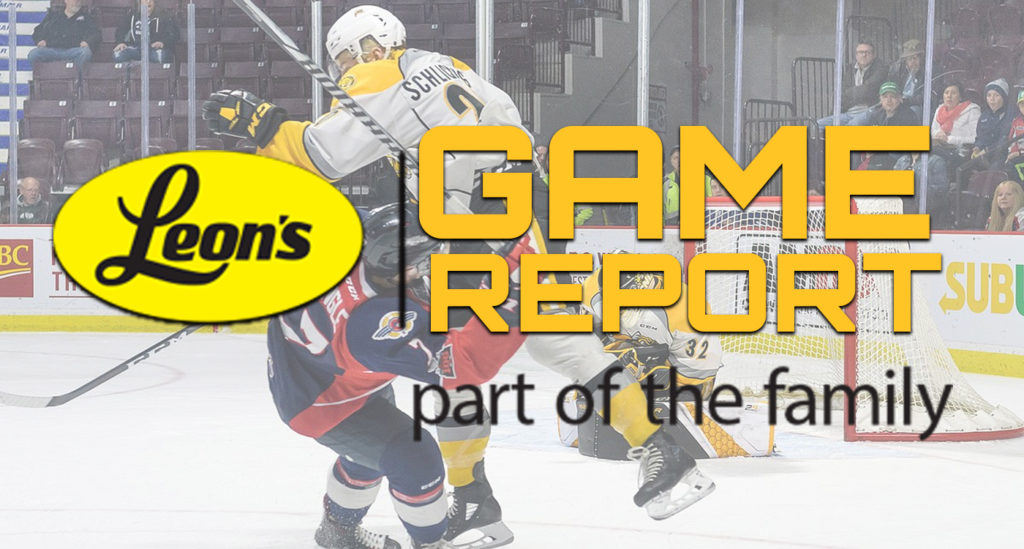 We’re going to the second round. The Real Season continues onward.

The Sarnia Sting visited the Windsor Spitfires on Sunday afternoon. It was game six of their best-of-seven quarterfinal.

Heading into the WFCU Centre, the Sting were looking to wrap up the series and advance to the next round – and so they did.

In the first period, the Sting went off on a blazing hot start. Four minutes in, Sarnia forward Ryan McGregor got things going. When linemate Sean Josling put one off the crossbar in tight, McGregor dove in to push the rebound into the cage. McGregor’s second of the series created a 1-0 lead.

A little over a minute later, Sting forward Franco Sproviero doubled the advantage. Defenceman Mitch Eliot sent in a long point blast on Spitfires goaltender Michael DiPietro. Sproviero gathered the rebound at the back door and tucked the puck under the bar. 2-0.

IN GAME | @FrancliSpeaking has the boys fired up with a 2-0 lead! @mitch_eliot44 with a blast from the point, and Franco puts it home!#BelieveTheBuzz #SARvsWSR pic.twitter.com/l8Q9dMhqdI

Moving into the second, Sting forward Jonathan Ang put the visiting side ahead 3-0. Ang capitalized on a Spits turnover, broke in with speed on DiPietro, and launched a snipe far side. Michael Pezzetta recorded the lone assist on Ang’s first goal of the postseason.

IN GAME | @jonathanang21 back at it again! Ang turns on the jets and buries one far side! 😎😎#BelieveTheBuzz #SARvsWSR pic.twitter.com/stDi0ltdRP

Spitfires defenceman William Sirman scored before the end of the second. Heading to the third, the Sting held a 3-1 lead.

In the final frame, the Spits looked to find some momentum. Overage defenceman Zach Shankar tallied his second of the series for Windsor, bringing the home squad within one.

It was Sting forward Jordan Ernst who scored the dagger.

Ernst sent a rocket past DiPietro with ten minutes to play. Ernst’s second of the series put the Sting ahead by two, and it was all but over. Hugo Leufvenius added the empty-netter, and the Sting took game six by a final score of 5-2.

IN GAME | Need a big goal? Just call up @jordan_ernst16 and he's got it covered every time! 💪💪#BelieveTheBuzz #SARvsWSR pic.twitter.com/MmE1X4PmTp

With today’s victory, the Sting eliminated the Spitfires in a tremendous six-game first round battle.

Sarnia goaltender Justin Fazio recorded eighteen saves today, and picked up the win in all of the Sting’s first round check marks.

We have advanced to the second round, and we’ll be facing off against the Kitchener Rangers! Schedule to be released as soon as we can. We’ll see you at The Hive for game three!