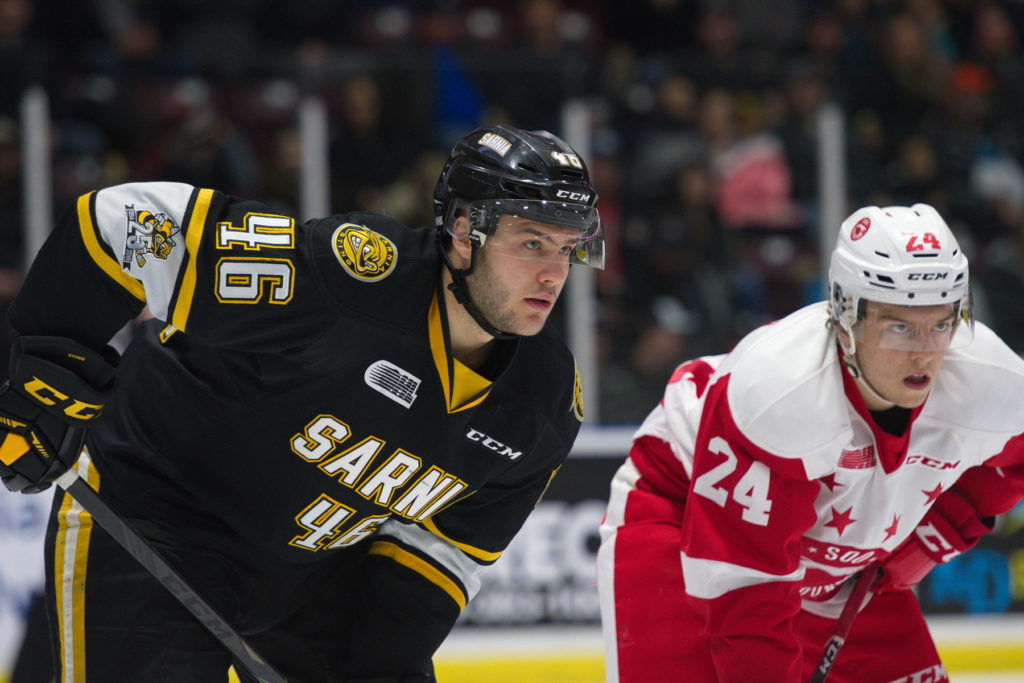 Tonight’s game was a rescheduled battle from late September. It turned out to be a dandy.

Soo forward Cole MacKay made it 2-0. MacKay shot accurately over Lamour for his twenty-fourth of the season.

Sting veteran Franco Sproviero had a great chance before the buzzer. With some four-on-four play going down, Sproviero flew in on Hounds goalie Matthew Villalta but just couldn’t tuck it past the Los Angles Kings prospect. After one period of play, the home side held the lead.

Moving into the second, the Hounds kept it coming. Jacob LeGuerrier sent a point shot past Lamour fifty-three seconds in. It was 3-0.

Our captain knew it was time to get rolling.

With the Sting on the powerplay, Ryan McGregor unleashed a laser past Villalta from inside the right circle. Mitch Eliot and Hugo Leufvenius recorded assists on McGregor’s twenty-first of the campaign.

Late in the second, the Greyhounds added two quick goals. Keeghan Howdeshell and Mac Hollowell each tallied with under a minute remaining in the frame. Heading to the third, it was suddenly a 5-1 game.

McGregor did everything he could to turn this one around.

Once again on the man-advantage, McGregor scored his second of the night. Leufvenius hit McGregor with a perfect crossing pass as our captain skated through the back door. We had brought the game to 5-2.

Despite our best efforts, we just couldn’t narrow the gap any tighter. Kerins scored his second of the evening late in the third to make tonight’s final score 6-2.

Lamour made some stellar saves throughout the evening, turning aside thirty-three shots.

We return to action Friday night at The Hive! Puck drop against the Battalion is set for 7:05 PM.

NEXT HOME GAME: STING vs. BATTALION