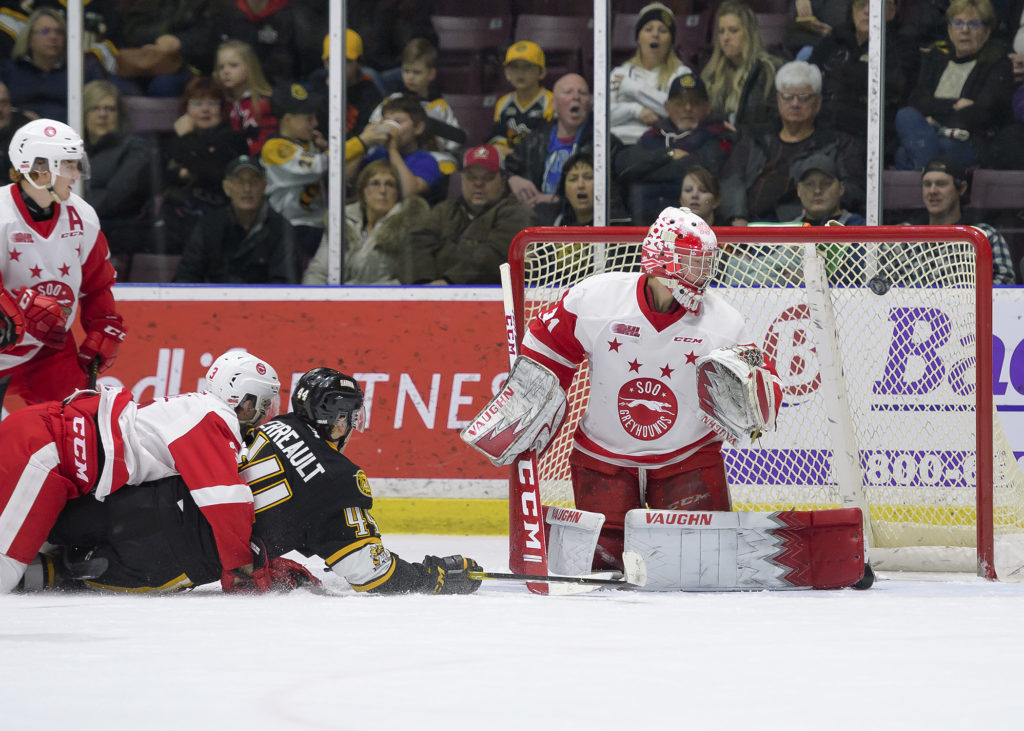 With a west division rival in town, we were stoked to get things going at Progressive Auto Sales Arena.

Hounds forward Jaromir Pytlik tied the game on a powerplay. Morgan Frost’s shot was deflected by Jaden Peca. As the puck rebounded off Sting goalie Ethan Langevin, Pytlik was at the back door to pot the puck.

Mac Hollowell put Sault Ste. Marie out in front. With the visitors once again on the man-advantage, Hollowell made it a 2-1 game.

Frost scored a shorthanded breakaway goal moments later to make it 3-1, but the Sting were set to reply.

Sarnia rookie forward Jacob Perreault scored an outstanding powerplay goal. Perreault split the Hounds defence unit, and with Soo blueliner Holden Wale draped all over him, Perreault powered through to lift the puck over Villalta. In what’s been an incredible rookie season for Perreault, this was definitely one of his best goals so far.

After one, the Greyhounds held a 3-2 lead.

In the second stanza, Hounds leading goal-scorer Keeghan Howdeshell scored his fortieth of the season. Howdeshell tossed a backhand blocker-side past Langevin. 4-2.

Soo forward Tye Kartye scored another backhand goal to make it 5-2. After the tally, Cameron Lamour replaced Langevin between the pipes.

Moving into the third frame, Sting defenceman Mitch Eliot kept us in the game with a powerplay goal. Eliot sniped a wrist shot from the point past Villalta to make it 5-3.

Sarnia forward Franco Sproviero brought us within one. Sproviero fired an off-balance shot that flew through the Hounds goaltender.  It was now a 5-4 battle to the finish. McGregor recorded his 150th career Ontario Hockey League point on the play. Congrats to the captain.

Pushing right to the final buzzer, time expired before we could tie the game. The final score was 5-4 for the Greyhounds.

We return to action next weekend with a road trip! Making stops in Erie and Niagara, we’ll look to continue our drive to the playoffs. Puck drop on Saturday night against the Otters is set for 7:00 PM at Erie Insurance Arena.