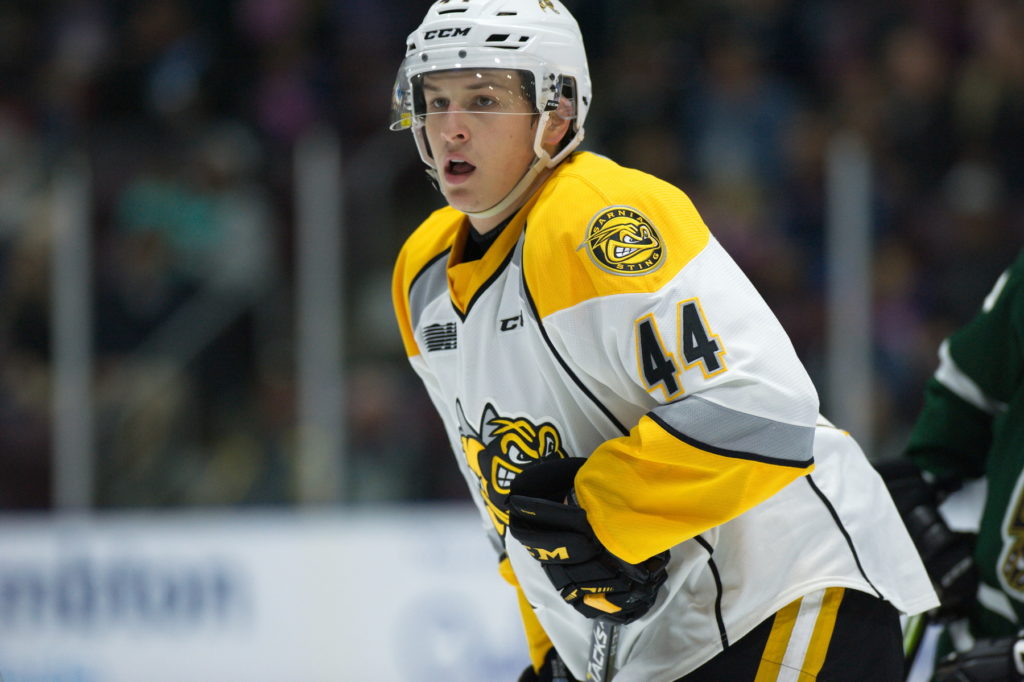 The Sarnia Sting visited the Kingston Frontenacs on Friday night.

It was the first of a three-in-three Eastern conference road trip for the Sting this weekend. They sure did start off strong.

Sarnia forward Anthony Salinitri got things rolling. Five minutes in, Sting defenceman Mitch Eliot sent a hard shot off the right pad of Fronts goalie Brendan Bonello. It ricocheted to Salinitri, who picked up his twelfth of the season. 1-0.

With the Sting on the powerplay later in the period, defenceman Kelton Hatcher continued his recent hot streak. Hatcher rushed the net on a break-in alongside Adam Ruzicka, and the latter found Hatcher at the back door. Fourth of the season for Hatcher.

Frontenacs captain Ryan Cranford scored just before the end of the first. It was the Fronts’ annual Teddy Bear Toss this evening; stuffed animals came flying down onto the ice for a great cause. The remaining twenty seconds of the first period were carried over to the second. After one, we held a 2-1 lead.

Sting rookie forward Jacob Perreault made his mark in the second period. Perreault unleashed a wicked snapshot past Bonello for his eighth of the campaign. 3-1.

Midway through the second, another rookie got in on the action. Sarnia forward Theo Hill picked up his second of the season. With the puck bobbling around at the top of the Kingston crease, Hill gathered it and found twine. 4-1. After the goal, Bonello was pulled from the Fronts’ net; Ryan Dugas took over between the pipes.

Cranford replied with his second of the night for Kingston to make it 4-2. But the Sting were too strong.

Not one to be outdone, Salinitri then responded with his second of the game, too. Salinitri cleaned up another rebound in front, this time from Sting forward Franco Sproviero. After two periods of play, we were up 5-2.

In the third, the Sting continued to dominate. Hugo Leufvenius scored for the sixth game in a row. Leufvenius utilized an awesome curl and drag before going backhand past Dugas. 6-2.

Sting forward Adam Ruzicka then scored to make it 7-2, and just seconds later Perreault scored another one to make it 8-2. It finished as tonight’s final score in a huge road win for Sarnia.

Aidan Hughes was solid as usual in front of the twine for the Sting. Hughes made twenty-two saves to pick up the win.

We’ll return to action tomorrow in Ottawa. It’ll be a 2:00 PM puck drop against the 67’s at TD Place!