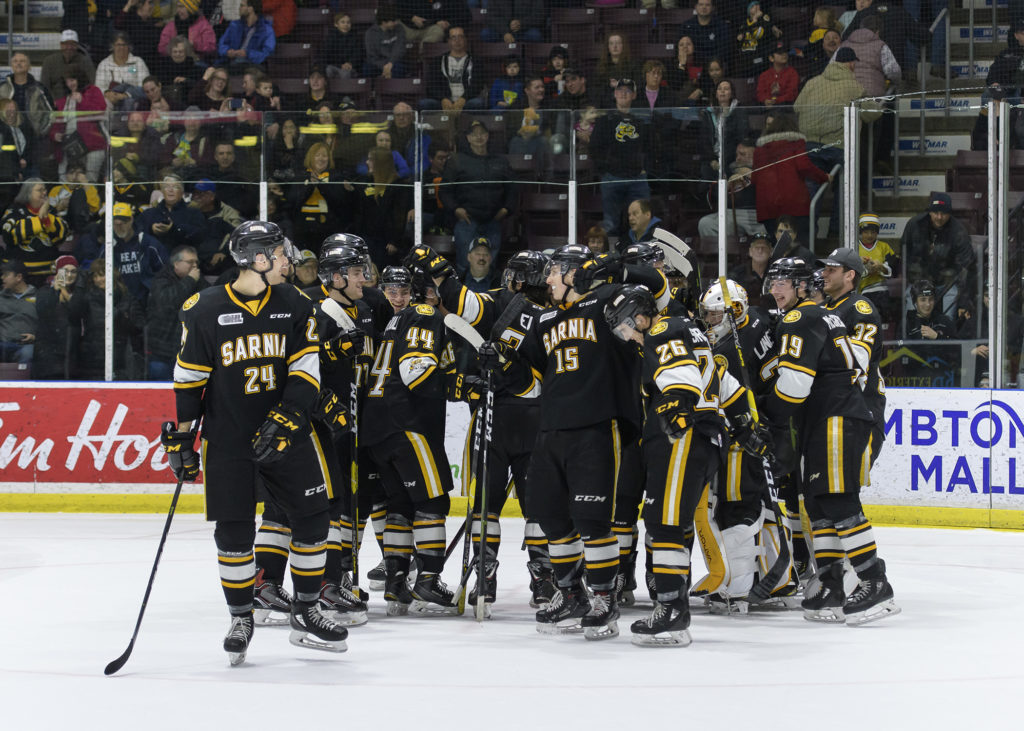 The Sarnia Sting hosted the Saginaw Spirit on Monday afternoon.

In front of a huge Family Day crowd at Progressive Auto Sales Arena, we had an absolute barn-burner at The Hive. Let’s get right into the scoring.

Opening up the action, Sting forward Hugo Leufvenius got things underway. Leufvenius drove the net, made a power move in the crease, and tucked the puck past Spirit netminder Ivan Prosvetov. It was Leufvenius’s team-leading thirty-second goal of the campaign.

Leufvenius drives the crease and makes a power move to tuck it into the net! 3️⃣2️⃣ for Hugo!🔥#SARvsSAG pic.twitter.com/Y66x4UNYbd

Sarnia defenceman Ashton Reesor doubled the lead just a few minutes later. Reesor sent a dandy point shot blocker-side and under the bar to give us a 2-0 lead.

Saginaw stormed back before the end of the first. Spirit skaters Brady Gilmour and Reagan O’Grady each tallied past Sting goalie Ethan Langevin to tie the game at 2-2 after one period of play.

Moving into the second, it was time for the Franco Sproviero Show. Our local Sarnia native scored back-to-back goals to suddenly gives us a 4-2 lead. Sproviero is up to nineteen goals in his overage campaign.

Sting captain Ryan McGregor kept the tide rolling. McGregor scored shorthanded to make it a 5-2 game. It was a real strange chain of events. McGregor’s goal was originally waived off by the referee, who thought it had hit the crossbar. Play continued and the Sting killed off the remaining penalty kill. As the play carried on without a whistle, Sting defenceman Nick Grima scored a clear goal. However, with the whistle resulting from Grima’s goal, McGregor’s goal went to video review. And because McGregor’s goal was eventually deemed good, everything that happened afterwards automatically became void. So, we went back on the penalty kill, completed it successfully once again, and McGregor’s goal officially had officially given us a 5-2 lead.

Spirit forward Jake Goldowski scored later in the second to make it 5-3. With a two-goal lead after two stanzas, we were feeling pretty good.

Things got spirited in the third.

Right off the bat in the final frame, Saginaw snipers Cole Perfetti and Blade Jenkins each scored. Just like that, we had ourselves a 5-5 battle.

Sting forward Sean Josling scored the go-ahead goal. Josling accepted a perfect pass from Jamieson Rees and sniped past Prosvetov to give us a 6-5 lead. The Hive was pumped.

With the Spirit on a five-minute powerplay late in the third, Saginaw defenceman Justin Murray tied the game. Following a wild scramble all around Langevin, Murray poked the puck over the goal line. After sixty minutes of a 6-6 matchup, we were off to extras.

A back-and-forth overtime solved nothing on the scoreboard – we needed to settle this with a shootout.

It was Sting rookie forward Jacob Perreault who scored the winner.

Perreault has had an incredible freshman season; scoring today’s winner was very fitting. Perreault is in a neck-and-neck race with Perfetti for the Ontario Hockey League rookie points title. Though Perreault’s winner today doesn’t officially count as a goal, it sure meant a lot to the jam-packed Sting crowd in attendance. Perreault dangled Prosvetov to give us a 7-6 victory on home ice.

Langevin stopped two-of-three in the shootout to pick up the victory in net.

NEXT HOME GAME: STING vs. BATTALION