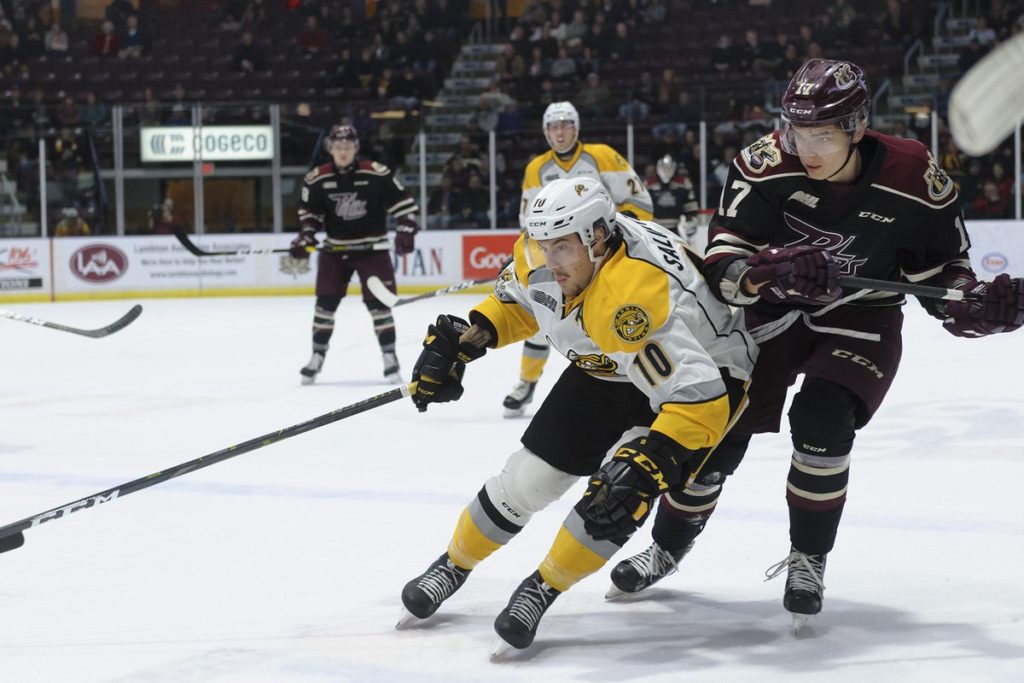 The Sarnia Sting hosted the Peterborough Petes on Saturday evening.

In front of a busy crowd at Progressive Auto Sales Arena, the Sting put forth a total team effort.

Sarnia forward Anthony Salinitri was first to get on the board. Salinitri stood atop the Peterborough crease and deflected a point shot from defenceman Marko Jakovljevic. Salinitri tipped the puck past Petes netminder Hunter Jones for his tenth of the season.

A few minutes later, Sting forward Franco Sproviero doubled the lead. With the Sting on the powerplay, Sproviero unleashed a hard slapshot from above the right circle. It flew past Jones to give us a 2-0 lead.

Late in the first, Hugo Leufvenius added another one. Leufvenius felt the meaning of “no pain, no gain” in front of Jones, but managed to record his team-leading eleventh of the campaign. After one, it was 3-0.

In the second frame, the Sting kept firing away.

Sting forward Brayden Guy potted a Calvin Martin rebound right on the doorstep of the Petes’ goal line. Make it 4-0.

Just minutes later, Guy returned the favour. On a two-on-one rush, Guy set up Martin for a beauty finish. A native of Peterborough, Martin now has six goals in his first season with us. Through forty minutes we were up 5-0.

Starting the third, Sarnia defenceman Mitch Eliot kept the fire going. Eliot scored on a shorthanded rush with Ryan McGregor to give us a 6-0 scoreboard advantage.

Cameron Butler and Adrien Beraldo scored for the Petes midway through the third period to spoil Sting goaltender Aidan Hughes’s shutout bid. Hughes was outstanding tonight and was a brick wall all game long.

Two awesome tilts from Jakovljevic and Guy sparked the boys the rest of the way.

Goals from Sting forward Curtis Egert and Petes forward Max Grondin finished up the evening. Tonight’s final score was 7-3 in a huge victory for the Sting.

Hughes made thirty-one excellent saves to pick up the win between the pipes.

We’ll return to action on Tuesday night in Kitchener! Puck drop is 7:00 PM at the Kitchener Memorial Auditorium.