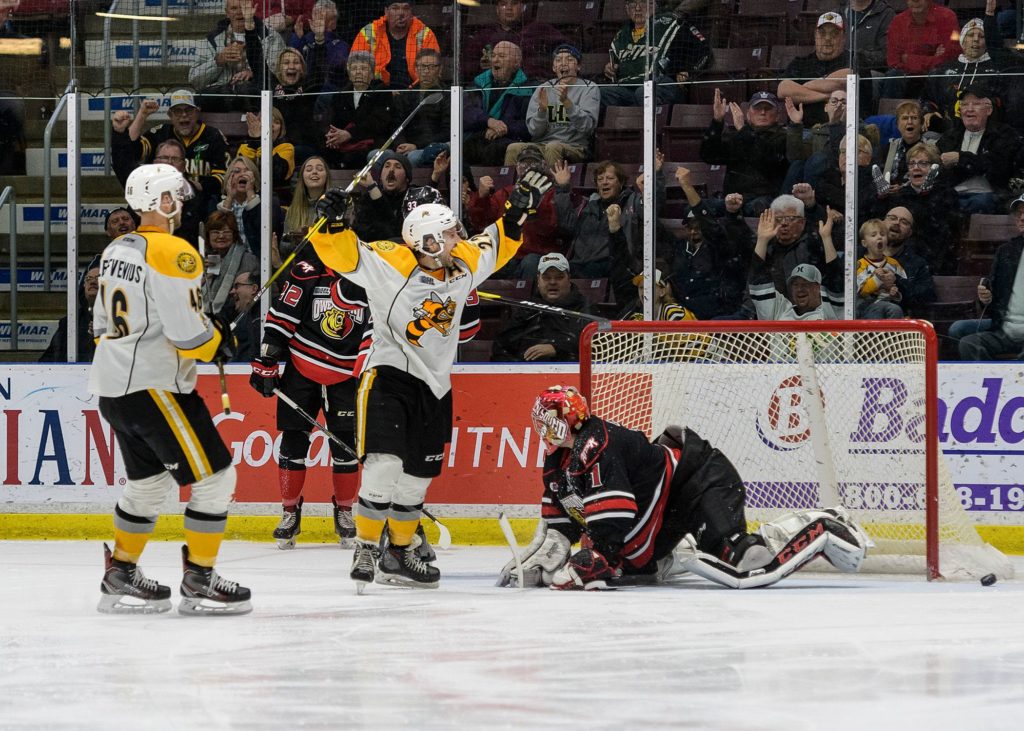 It was our first game following the holiday mid-season break. In front of an excited crowd at Progressive Auto Sales Arena, the Sting put on a show.

Midway through the first period, Sting forward Brayden Guy got the ball rolling. Guy’s tenth of the season gave us a 1-0 lead. Calvin Martin forced an Attack turnover in the neutral zone. Martin then dished to Jamieson Rees, who sent a crossing pass over to Guy. Slipping it past Owen Sound netminder Mack Guzda, Guy got us on the board.

Owen Sound overage forward Kevin Hancock replied for the visitors. After one period of play, we had a 1-1 game.

In the second, Sarnia sniper Hugo Leufvenius continued his scoring streak. Leufvenius’s twenty-second goal of the season extended his point streak to an OHL-leading eighteen games. Ryan McGregor set up the tally to give us a 2-1 lead.

Attack forward Daylon Groulx tied the game at 2-2 with a deflection.

It was then time for Jacob Perreault to start partying. Our incredible rookie sniper scored his eighteenth of the season. Mitch Eliot sent a perfectly placed pass over to Perreault for the one-timer. After two, we held a 3-2 lead.

The third period was where we took over. Perreault scored another one just twelve seconds in. Perreault picked the pocket of an Attack defenceman trying to break out of the Owen Sound end. Whipping around and in alone on Guzda, Perreault sniped far side. 4-2.

McGregor tucked in yet another goal just seconds later to extend the lead to 5-2.

And twenty seconds after that, Eliot scored one for himself. After just two minutes of the third period, we suddenly had a 6-2 lead.

Maksim Sushko scored late for Owen Sound, but this one was a wrap.

Ethan Langevin was a rock as usual in our crease. Langevin turned aside eighteen shots to pick up the victory.

We’ll return to action on Sunday for the first of our New Year’s back-to-back against London. Puck drop at The Hive against the Knights is 2:05 PM!