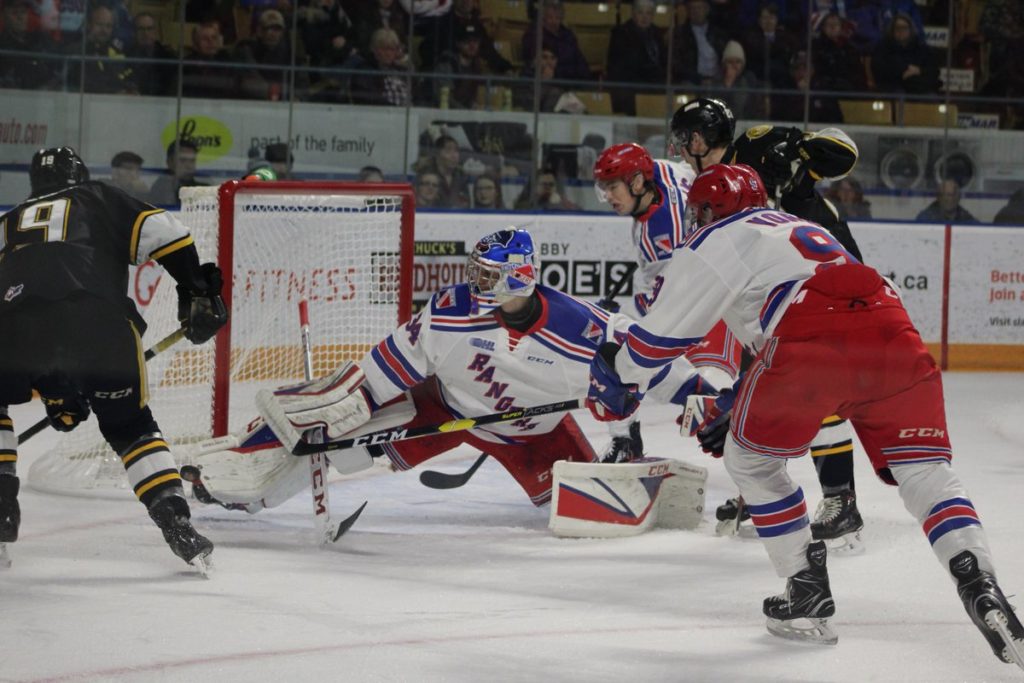 The Sarnia Sting visited the Kitchener Rangers on Tuesday night.

This was a night of goals, so let’s get right into it.

In the first period, Kitchener struck first. Rangers forward Rickard Hugg picked up his twelfth of the season on a powerplay goal in tight on Sting goalie Aidan Hughes.

.@FrancliSpeaking goes shelf on the backhand for his seventh goal of the season! 🤟#SARvsKIT pic.twitter.com/meik4uofWN

Those two goals would be all for the first, but things went full-steam ahead in the middle frame.

Two minutes into the second period, Sting forward Adam Ruzicka gave us a 2-1 lead. After Sting defenceman Marko Jakovljevic sent a hard point shot in on Richardson, Ruzicka gathered the rebound and slammed it home.

Kitchener fired right back. Blueshirts forward Jonathan Yantsis tied the game at 2-2. Yantsis was alone in front of Hughes, and linemate Greg Meireles found him open in front. It was Yantsis’s nineteenth of the season.

Carrying on in style, Ruzicka replied with another one. Ruzicka went in alone on a breakaway and slipped the puck through Richardson. We were back on top 3-2.

Sting forwards Brayden Guy and Hugo Leufvenius then added back-to-back markers to extend the lead to 5-2. It all added up to three goals in just under two minutes for Sarnia. The game had completely changed.

Nick McHugh responded for the Rangers with seven to play in the second, but the Sting continued to pressure.

Sproviero’s second of the evening gave the visitors a 6-3 lead heading into the third. Sproviero found himself with open space in front of Richardson, and with all the time he could ask for, potted his eighth of the campaign. Following the goal, Lucas Pfeil took over in net for Kitchener.

In the third, Sting forward Anthony Salinitri fired the dagger. Salinitri broke into the offensive zone shorthanded and unleashed a long snipe past Pfeil. It was 7-3.

Rangers forward Eric Guest scored late for the home side, but this one was over. Tonight’s final score was 7-4 for the Sting in a huge road victory.

Hughes was outstanding in net for Sarnia, turning aside thirty-two of thirty-six shots faced.

We return to action with a three-in-three Eastern conference road trip this weekend! First up is Kingston on Friday night! Puck drop at Leon’s Centre is 7:00 PM.