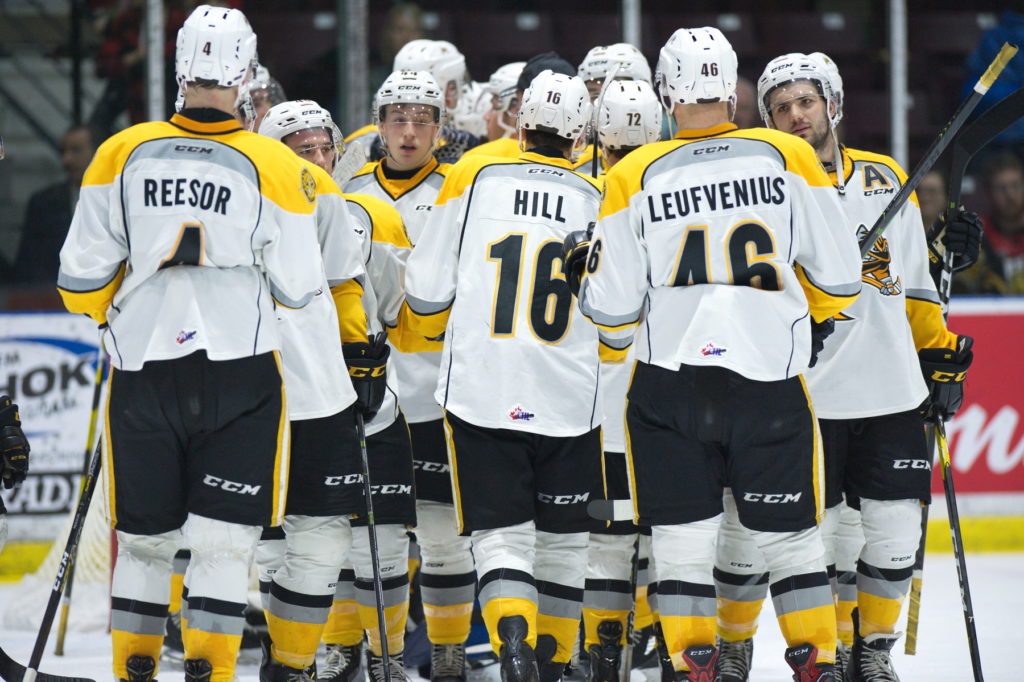 The Sarnia Sting visited the Barrie Colts on Thursday night.

On a chilly evening outside the Barrie Molson Centre, things were heating up on the inside. Physical play paced the game and, even better, the Sting set fire to the score sheet.

Sarnia forward Brayden Guy opened the scoring just two minutes into the game. When the puck bounced around in front of Colts netminder Kai Edmonds, Guy was there to put it over the goal line. 1-0.

With his team down a goal, Colts forward Jason Willms was looking for a mid-period spark. Willms dropped the mitts with Sting forward Sean Josling in a spirited middleweight tilt. Josling throw some hard right crosses before securing the takedown.

It looked like we would finish the first with a 1-0 lead, but Sting defenceman Mitch Eliot had other plans. Eliot unleashed a bomb of a powerplay shot that flew past Edmonds with only nine seconds left in the period. After one, we had a two-goal advantage and momentum on our side.

.@mitch_eliot44 with a rocket one-timer into the twine! Incredible shot from the #Canucks prospect!#SARvsBAR pic.twitter.com/sIi6iQVmVl

Sting rookie forward Jacob Perreault extended the lead in the second period. This goal was the result of an amazing passing play between Hugo Leufvenius, Jamieson Rees, and Perreault. We had a 3-0 lead thanks to Perreault’s twenty-third tally of the season.

Colts forward Ryan Suzuki squeezed one through Sarnia goaltender Cameron Lamour to get the home side on the board. But we were still rolling.

Sarnia forward Calvin Martin scored to make it 4-1. Martin intended to shoot a rocket, but it turned out to be a knucklepuck that gave Edmonds no real chance. We were happy to take the three-goal lead into the third.

For a few minutes at the start of the final frame, it looked like the Colts were considering a comeback. Barrie forward Riley Piercey potted a swift goal past Lamour to bring the Colts within a pair. But the Sting held their ground, and eventually broke it wide open.

Josling scored two goals less than a minute apart to knock the wind right out of the Colts’ sails. Franco Sproviero added the exclamation mark, and we skated away with an outstanding 7-2 victory.

Lamour was stellar between the pipes, turning aside thirty-five shots.

We return to action on Saturday night in Sudbury. Puck drop against the Wolves is set for 7:05 PM!