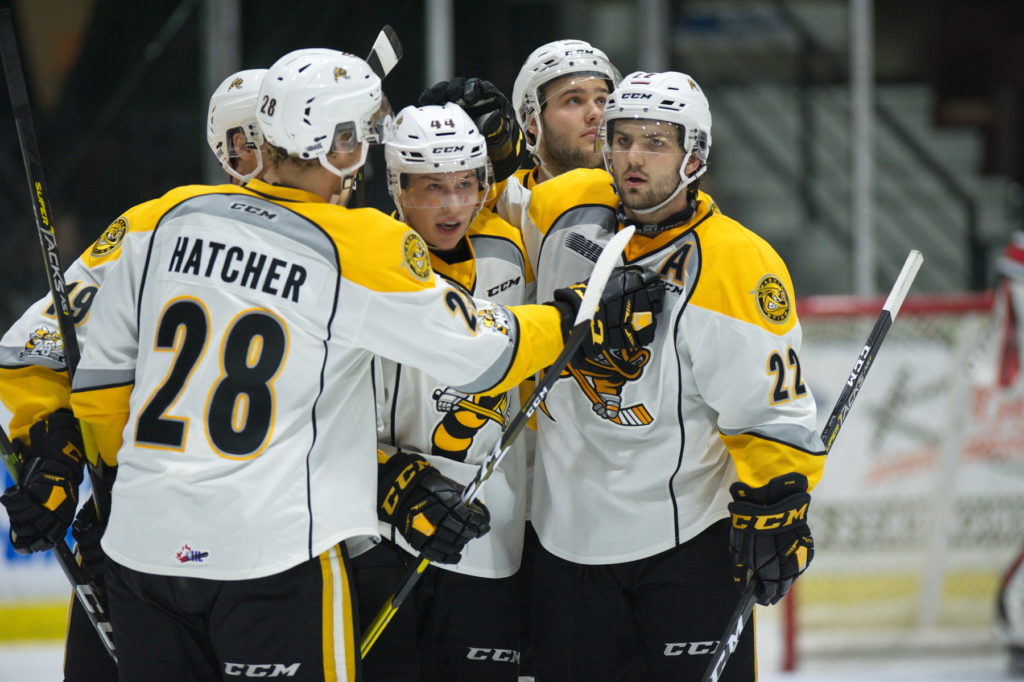 The Sarnia Sting visited the Niagara IceDogs on Sunday afternoon.

Taking on one of the Eastern conference’s most skilled teams, this was a true test. We squared up for the the challenge.

IceDogs centre Jack Studnicka scored shorthanded for the opening goal of the day. Studnicka was on a breakaway and went five-hole through Sting goaltender Ethan Langevin. We looked a little hesitant early on, but Studnicka’s goal brought us to full attention. Sarnia was ready to roll.

Sting forward Anthony Tabak got us going with his first goal in white, black, and gold colours. Acquired from the Sudbury Wolves at the trade deadline, Tabak has excelled with his new linemates. Today it paid off. Tabak potted a rebound to tie the game at 1-1.

Moving into the second period, this one got real busy.

Sarnia winger Sean Josling gave us the lead. Josling was on the receiving end of a perfect centering pass from Ryan McGregor. Josling shoveled the puck through IceDogs netminder Stephen Dhillon to make it 2-1. Josling became our fifth twenty-goal scorer of the season.

With the Sting shorthanded, overage forward Franco Sproviero went to work. Sproviero, a man known league-wide for his stellar penalty-killing, sniped high over Dhillon as he soared down the left wing. 3-1.

Niagara responded with two quick goals. Jason Robertson picked up a single, and Studnicka added his second of the day. Through two stanzas, we had ourselves a 3-3 game.

In the third period, we went back and forth right to the final horn.

Only a minute into the frame, Josling recorded his second goal of the game. Josling unleashed a powerful slapshot that caught Dhillon by surprise. It flew into the twine to give us a 4-3 advantage.

.@seanjosling unleashes a slapshot that soars into the twine for his second goal of the game! ✈️💪#SARvsNIA pic.twitter.com/oGdwfAMiyh

With four minutes to play, Sting forward Curtis Egert gave us a two-goal lead. A Welland, Ontario native, Egert had a large contingent of supporters in attendance today. Egert’s cheering section went bonkers when they saw him score, and rightly so. 5-3.

Things got interesting in the last three minutes.

IceDogs forward Kirill Maksimov brought the home team within one. Suddenly, it was 5-4.

Sting blueliner Kelton Hatcher had seen enough. With the IceDogs netminder pulled in favour of the extra attacker, Hatcher scored into the empty net.

Niagara captain Ben Jones scored a late one for the ‘Dogs with twenty-nine seconds to play. Jones’s goal made for an exciting finish, but we held on strong. Today’s final score was 6-5 for the Sting. It was a huge victory on the road.

We return to the ice on Saturday in Sault Ste. Marie! Puck drop at GFL Memorial Gardens against the rival Greyhounds is 7:07 PM.