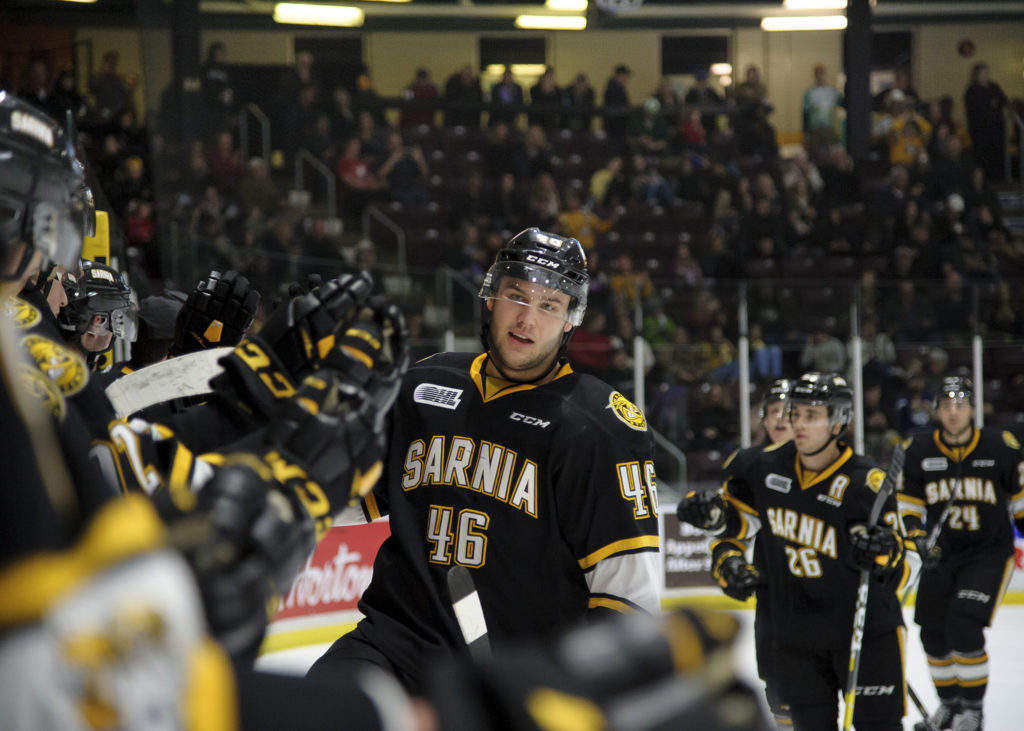 It was Country Night at The Hive in support of CMHA Ontario. Country music star Eric Ethridge, a proud Sarnia native, was in attendance for the exciting night.

Sting goaltender Ethan Langevin was the story of the first period. Langevin made numerous pad saves to hold the game scoreless after one.

In the second stanza, the goals came in hot. Sting defenceman Nick Grima was credited with the night’s opening tally. Grima unleashed a point shot that found a way past Battalion netminder Christian Propp. It appeared forward Curtis Egert may have deflected it, but Grima received the official goal. Either way, we were up 1-0.

Only two minutes later, Sting forward Hugo Leufvenius came right back. Grima took another hard point shot, and this time it rebounded off Propp. Leufvenius was there to whack in the rebound. We were now up 2-1.

Leufvenius then added his second of the night. Our leading goal-scorer picked up his thirty-fourth tally of the season by dangling through the Battalion defence. Leufvenius finished it off by tucking the puck past Propp to give us a 3-1 lead.

Hugo Leufvenius dangles through the defence for his second goal of the night! 3️⃣4️⃣ on the season!#SARvsNB🤠 pic.twitter.com/za6Pn7YEjk

Moving into the third frame, Sarnia forward Franco Sproviero kept the good times rolling. Sproviero went top shelf and under the crossbar past Propp to make it a 4-1 game.

Sting forward Sean Josling bumped the score up to 5-1. Josling scored a baseball-style goal, batting the puck past Propp.

Battalion skater Mitch Russell picked up a second goal for North Bay, but that was as much as they would get tonight.

Josling added his second of the game into an empty net, and we cruised away with a 6-2 victory on home ice.

Langevin turned aside twenty-seven shots to earn the victory between the pipes.

We return to the ice on Sunday right here at The Hive! Puck drop against the rival Sault Ste. Marie Greyhounds is 2:05 PM!