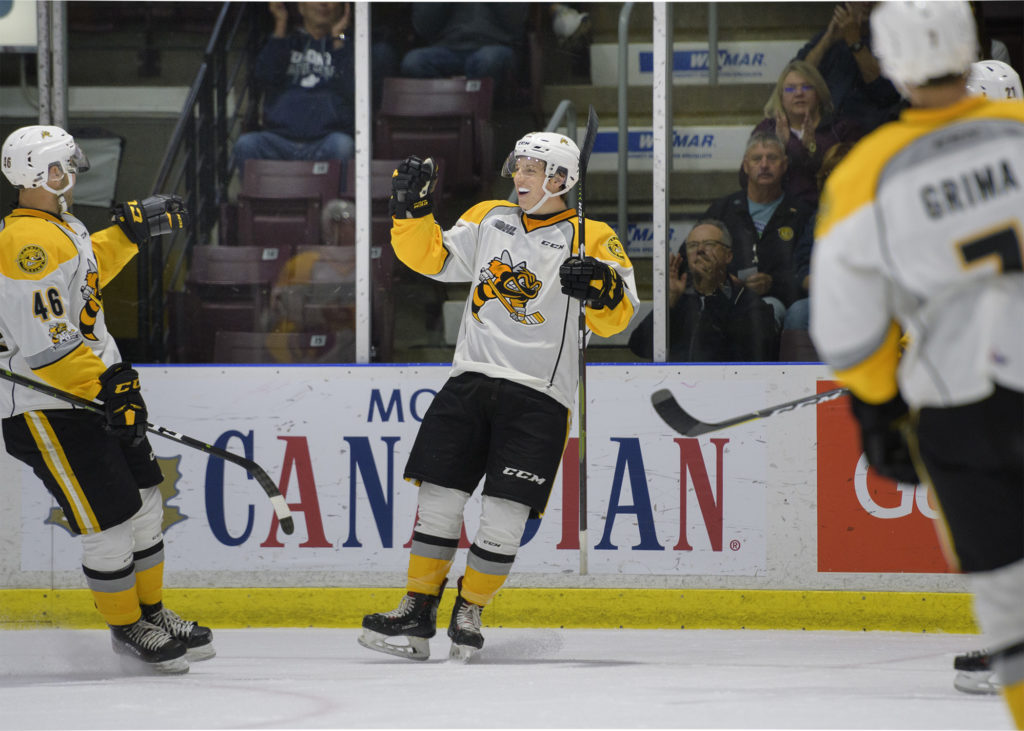 The Sarnia Sting hosted the Guelph Storm on Saturday night.

It was the second meeting of the season between these two Western conference rivals. After a wild finish at the Sleeman Centre last week, these two were back for another round at Progressive Auto Sales Arena.

Guelph got off to a quick start this evening, scoring just two minutes in. Storm forward Mason Primeau sent a one-timer past Sting goaltender Ethan Langevin to give the visitors a 1-0 lead.

As the Sting tend to do, they bounced back immediately. Sarnia captain Ryan McGregor began the charge by firing one off the iron mere moments after Primeau’s tally. Then the goals arrived.

Sting forward Hugo Leufvenius scored his third of the season. Leufvenius rushed the blue paint, took a cross-crease pass from linemate Sean Josling, and potted it past Storm goalie Nico Daws. McGregor also grabbed an apple on the play.

Barely a minute later, Franco Sproviero gave the Sting the lead. Sproviero pounced on a rebound and sent it to the far twine. It went to video review, but it was a clear goal. 2-1.

In the second period, the Storm once again struck early. Veteran forward Zach Poirier scored his seventh of the season. It made the game 2-2. But things were about the break open.

And very shortly after, Sting second-year forward Brayden Guy scored a lucky one. Guy was trying to send a centering pass to linemate Jacob Perreault, but the puck deflected off a Storm defenceman and over the line. They all count. 4-2.

To start the third, Leufvenius sniped home a total dart for his second of the night. Check this one out below.

Hugo Leufvenius is putting on a show! Check out his second snipe of the game! 🎯#SARvsGUE pic.twitter.com/zDbb3z2Rut

Guelph forward Tag Bertuzzi attempted to make it a close game. Bertuzzi’s fourth of the year brought the Storm within a pair. It was a 5-3 game, but the Sting were too strong.

Sarnia forward Calvin Martin scored to make it 6-3 with seven minutes remaining in the final frame. Martin broke in on a fast break and smoothly lifted the puck over Daws. It was the dagger.

Tonight’s final score was 6-3 for the Sting. Langevin recorded the victory in between the pipes, turning aside twenty-one of twenty-four shots faced.

We’ll see you tomorrow afternoon when we host the Mississauga Steelheads for a Sunday matinee!

NEXT HOME GAME: STING vs. STEELHEADS