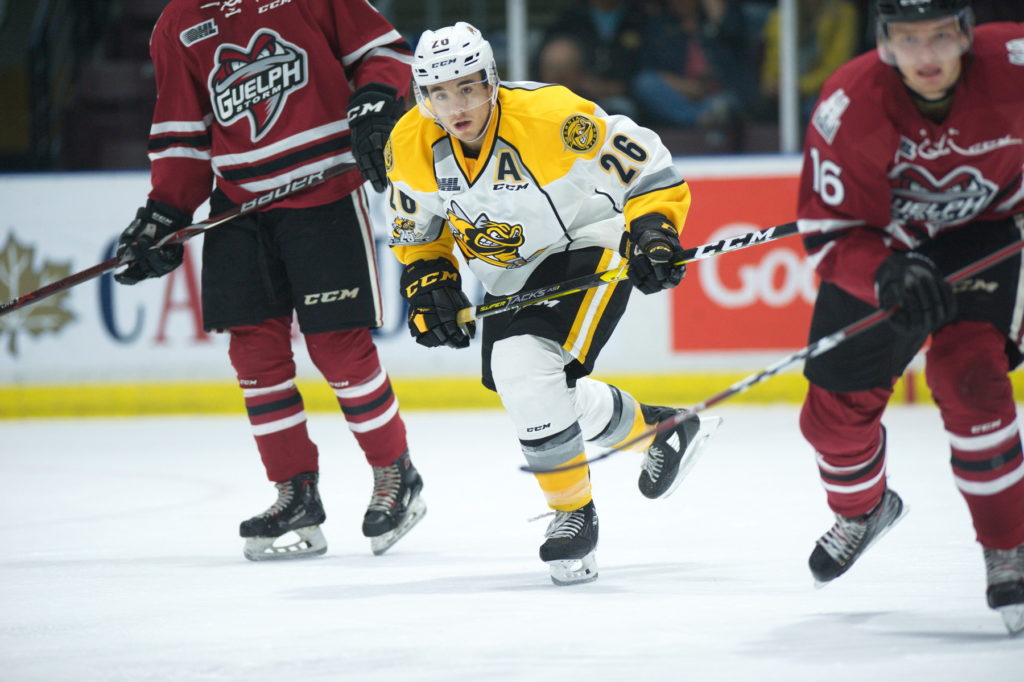 The Sarnia Sting visited the Guelph Storm on Friday night.

It was the first battle of a home-and-home we’re having with the Storm this weekend.

In the first period, Sting defenceman Nick Grima scored the frame’s lone goal. Grima shot a powerful one-timer from high between the circles. It flew past Guelph netminder Anthony Popovich to give us a 1-0 lead.

Moving into the second, things got a little wild.

Storm forward Nate Schnarr tied the game. After defenceman Markus Phillips sent a bouncing rebound off the right pad of Sting goalie Cameron Lamour, Schnarr kicked the puck to his stick and potted it. 1-1.

But then the Sting caught fire.

Jamieson Rees got the party started. After linemate Franco Sproviero drove the net and lifted a nifty backhand into Popovich, the puck lay loose in the crease. Rees poked it through the Storm goaltender to give us a 2-1 lead.

Just twenty seconds later, Sting forward Justin McCombs added another one. Curtis Egert forced a Storm defenceman to turn the puck over right in front of the Guelph cage. McCombs was sitting in the slot and ready to snipe. McCombs’s third of the campaign put us ahead by a pair.

Riding the momentum, we immediately scored twice more. Hugo Leufvenius and Brayden Guy added two quick snipes to make it a 5-1 game. On a powerplay advantage, Leufvenius shot low on Popovich to score his team-leading thirty-first of the season. Popovich was then replaced in the Storm crease by Nico Daws. Guy didn’t seem to care, as he sniped his seventeenth of the year just twenty seconds after Leufvenius had scored.

Guelph forward Alexey Toropchenko got one back for the home side, but we were cruising with a 5-2 lead after two periods of play.

In the final frame we finished strong. Lamour didn’t allow a single goal in the third, backstopping us to victory.

Sting forward Sean Josling added the final touch, scoring on a beauty forehand-backhand deke to make tonight’s final score 6-2. Sproviero and Anthony Tabak assisted on the awesome passing play. To just about anyone watching, this evening was clearly Tabak’s best game in a Sting sweater since being acquired at the trade deadline.

Lamour turned aside an incredible thirty-six shots to lead us to victory.

We’re already excited for the rematch tomorrow night! Puck drop against the Storm is set for 7:05 PM at The Hive!