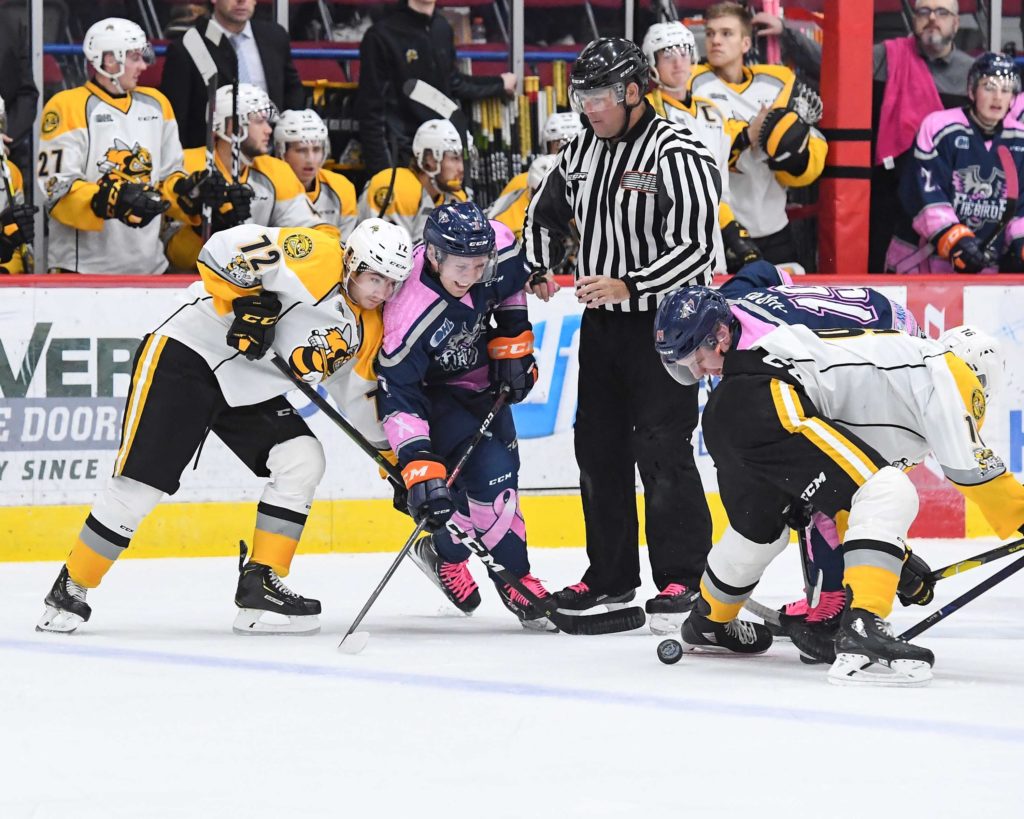 The Sarnia Sting visited the Flint Firebirds on Saturday evening for the second game of their home-and-home series. It was Pink in the Rink night at the Dort Credit Union Federal Event Center. We were grateful to be part of it.

In the first period, Sting defenceman Mitch Eliot got the ball rolling. Eliot picked up a powerplay marker with his third of the season. With momentum building, the Sting continued to pressure.

Even being a man down on the penalty kill couldn’t hold back Sarnia. Sting forward Anthony Salinitri set up Sean Josling to give the visitors a 2-0 lead. Josling and Salinitri entered the Firebirds zone on a two-on-one, and Josling finished off a sweet play past Flint goalie Luke Cavallin.

Sting forward Hugo Leufvenius scored his seventh of the campaign before the end of the first frame. After one, Sarnia held a 3-0 lead.

The second period was all about Sting goalie Ethan Langevin. Our young netminder made two outstanding saves late in the period. Check them out below.

And boy oh boy @ethanlangevin33 wasn’t done there! Another one! 🤩🤩 pic.twitter.com/ItqTFXgvKl

Firebirds forwards Connor Roberts and Jack Phibbs added single tallies before the end of the frame. After two, we were up 3-2.

The third period continued to be a storm of goals.

Roberts scored his second of the night for the Firebirds to tie the game at 3-3.

Eliot then scored his second of the game for the Sting. Salinitri set up Eliot for a one-timer and the latter made no mistake. 4-3.

Flint forward Ethan Keppen replied for the home side with a powerplay goal. Make it 4-4.

On a night where goals came in pairs, Keppen tied the game at 5-5 with a minute to play. We were off to overtime.

In the extra frame, Sting captain Ryan McGregor was the hero. McGregor accepted a setup from linemate Hugo Leufvenius just one minute in, and Sarnia escaped with a 6-5 overtime victory. Langevin made twenty saves to pick up the win.

We return to action tomorrow afternoon at home against the Saginaw Spirit! We’ll see you for 2:05 PM puck drop. It’s our Halloween Game at Progressive Auto Sales Arena!