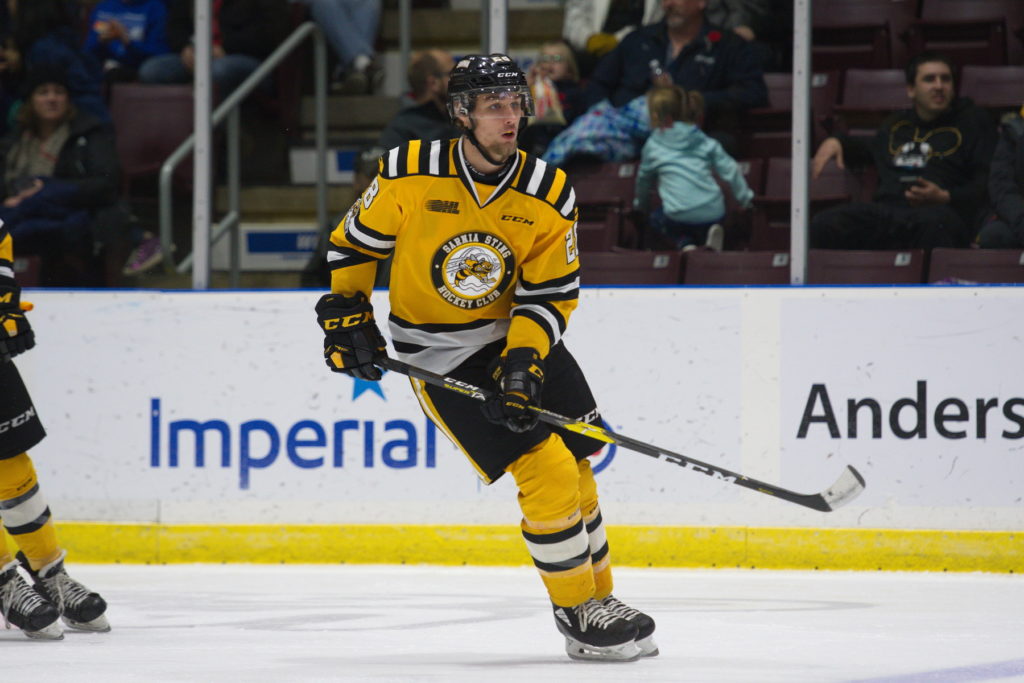 The Sarnia Sting visited the Windsor Spitfires on Thursday night.

Before the game, the Spits celebrated ten years playing out of the WFCU Centre. Alumni were on hand for a celebration. But once the puck dropped, it was game on.

In the first period, Sting rookie forward Jacob Perreault continued his torrid pace this season. Positioned low beside Spitfires goalie Kari Piiroinen, Perreault deflected a shot from linemate Hugo Leufvenius. It snuck through Piiroinen to give us a 1-0 lead.

Sting netminder Ethan Langevin made numerous outstanding saves to keep us ahead by a goal.

Moving into the second, the score-sheet was quiet until late. Daniel D’Amico scored a pair of goals for Windsor to put the home side ahead 2-1.

Breaking into the Spitfires’ zone on a two-on-one with Jamieson Rees, Ruzicka finished off an awesome give-and-go. Ruzicka fired the puck past Piiroinen for his ninth of the campaign.

Only thirty-seven seconds later, Sting captain Ryan McGregor added another one. Right off an offensive zone faceoff, McGregor sent a snipe through Piiroinen. It was 3-2 through two.

Up by one to start the third, Spits rookie forward Will Cuylle knotted the game for Windsor. But late in the third, the Sting came back.

With five to play in regulation, Perreault scored his second of the night. Perreault sent a total laser just under the bar on a powerplay. We now held a 4-3 lead.

Cuylle tied the game, scoring his second of the evening with less than three to play. We were off to overtime.

In the extra frame, Sting defenceman Kelton Hatcher was the hero. On a rush with Rees, Hatcher charged the net and buried the rebound into the twine. Tonight’s final score was 5-4. It was a huge road victory.

Langevin made an incredible flurry of saves in overtime, setting us up to secure the win.

We return to action tomorrow night to complete our home-and-home with the Spitfires! Puck drop at The Hive is set for 7:05 PM!