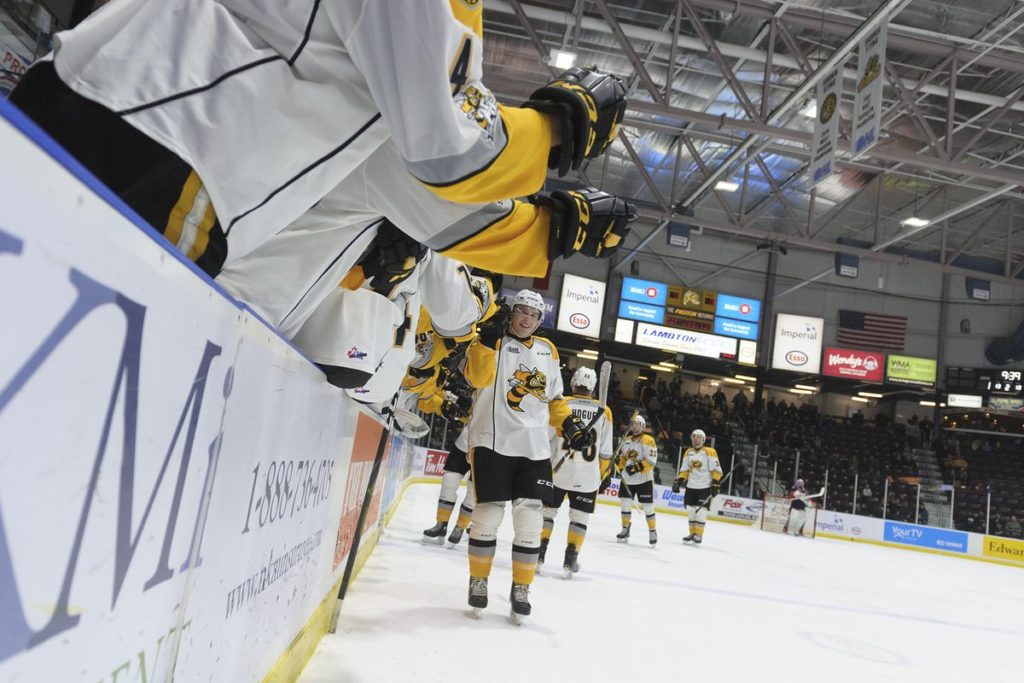 After a thrilling 5-4 overtime victory at the WFCU Centre last night, the Sting were looking to sweep the home-and-home. And tonight at The Hive, they did just that.

In the first period, Sarnia forward Curtis Egert opened the action. Hugo Leufvenius engineered the goal by rushing low to the top of the crease, curling the puck, and dishing late to Egert. When Egert fired home a one-timer, we held a 1-0 lead.

Moving into the second, the Sting broke this one wide open.

Midway through the frame, Sting forward Jacob Perreault doubled our lead. Perreault had two goals last night, and his tally tonight came as his thirteenth of the season. Sting captain Ryan McGregor skated in on a two-on-one with Perreault, and the latter set up McGregor for a one-timer. When the rebound ricocheted off Spitfires goalie Kari Piiroinen, it bounced directly to Perreault. Just like that, it was 2-0.

Only two minutes later, Calvin Martin added to Sarnia’s lead. Martin forced a turnover as Windsor attempted to break out of their defensive zone. Martin quickly dished to Franco Sproviero, who promptly returned the puck to Martin, who had an open cage to blast at. 3-0.

Late in the second, good karma returned the favor to Sproviero. The Sting overager selflessly set up Martin earlier, so now it was Sproviero’s turn. This time it was defenceman Nick Grima who served as playmaker. Grima skated in wide on Piiroinen, drew the goalie in, and whipped a perfect pass to Sproviero at the back door. An awesome assist from Grima meant we were up 4-0.

Colton Incze replaced Piiroinen in net for the Spitfires to start the third period.

Windsor forward Curtis Douglas got the Spits on board midway through the frame. A hard shot from Douglas handcuffed Sting goalie Ethan Langevin just enough to create a rebound. Douglas followed it up to score his fourteenth of the season. That was as far as they would get.

Adam Ruzicka scored for the Sting with twenty seconds to play, stamping an exclamation point on the victory.

Langevin was terrific for Sarnia for the second consecutive night. Thanks to a huge second period, the Sting took a 5-1 win on home ice.

We return to action tomorrow afternoon right here at The Hive against the Kingston Frontenacs! Bring your teddy bears, because you know what game this is! We’ll see you for 2:00 PM puck drop on what should be an incredible day here in Sarnia.

NEXT HOME GAME: STING vs. FRONTENACS