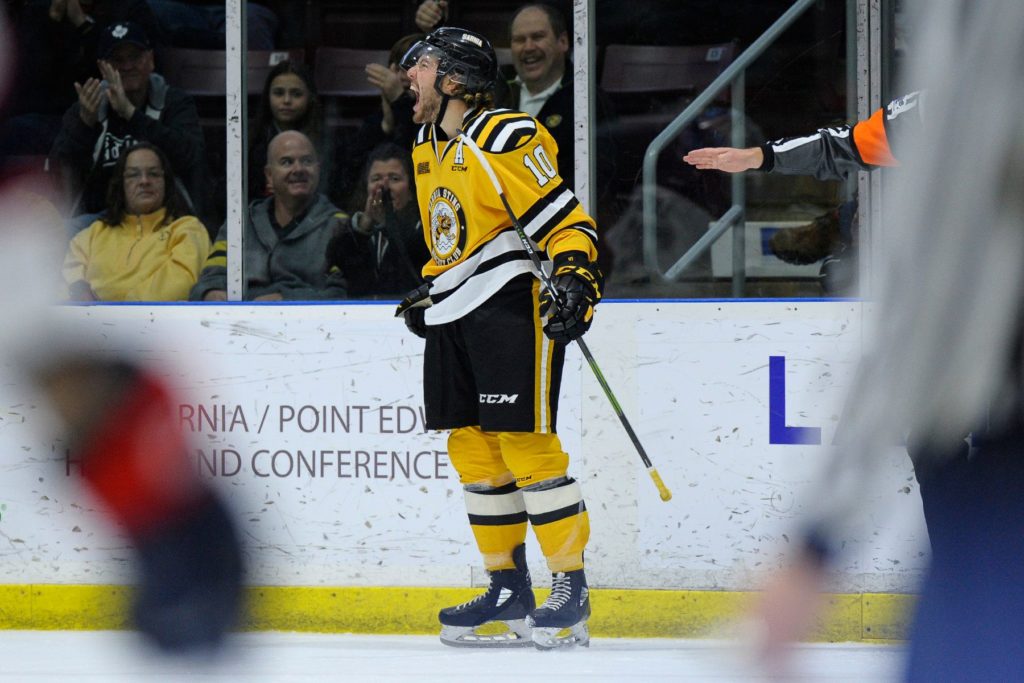 The Sarnia Sting hosted the Saginaw Spirit on Sunday afternoon.

In the spirit of Halloween, fans across Progressive Auto Sales Arena were dressed up in their best costumes. On the ice, the Sting picked up a 5-3 victory to complete an undefeated three-game weekend.

In the first period, Saginaw rookie forward Cole Perfetti opened the scoring. Perfetti took a shot that deflected off a body before squeaking past Sting goaltender Aidan Hughes. The art of surprise gave the visitors a 1-0 lead.

On a weekend of somewhat unexpected goal scorers for the Sting, defenceman Nick Grima replied with his first of the season. Grima came down the right wing and wired a snipe past Spirit netminder Cameron Lamour. Tie game.

Moving into the middle frame, Sting forward Sean Josling scored his sixth of the season. Josling positioned himself in front off the odd-man rush and was in the perfect spot to pop the puck past Lamour. We had a 2-1 lead.

Spirit forward Cole Coskey came back midway through the second to once again tie the game. Coskey went blocker-side on Hughes to make it 2-2.

Late in the second, Saginaw’s Aidan Prueter gave the visitors their second lead of the afternoon. But we still had an unexpected goal scoring trend to continue.

Sting defenceman Kelton Hatcher scored his second goal of the season, also his second of the weekend. Hatcher finished off an outstanding rush alongside forwards Hugo Leufvenius and Jacob Perreault. Hatcher’s perfect shot gave us a 3-3 game heading into the third.

.@KeltonHatcher is on 🔥🔥! Check out this beauty finish, set up by Hugo and @JPerreault_44!#SARvsSAG pic.twitter.com/F6KC4maJdS

In the final frame, Sting assistant captain Anthony Salinitri took over. Ten minutes in, Salinitri sent a laser over the shoulder of Lamour to put Sarnia ahead 4-3. Salinitri would later finish things off with an empty-net goal to make our final score 5-3 today.

Hughes made eighteen saves between the pipes to pick up the victory.

We’ll see you on Thursday when we host the Barrie Colts right here at The Hive!

NEXT HOME GAME: STING vs. COLTS