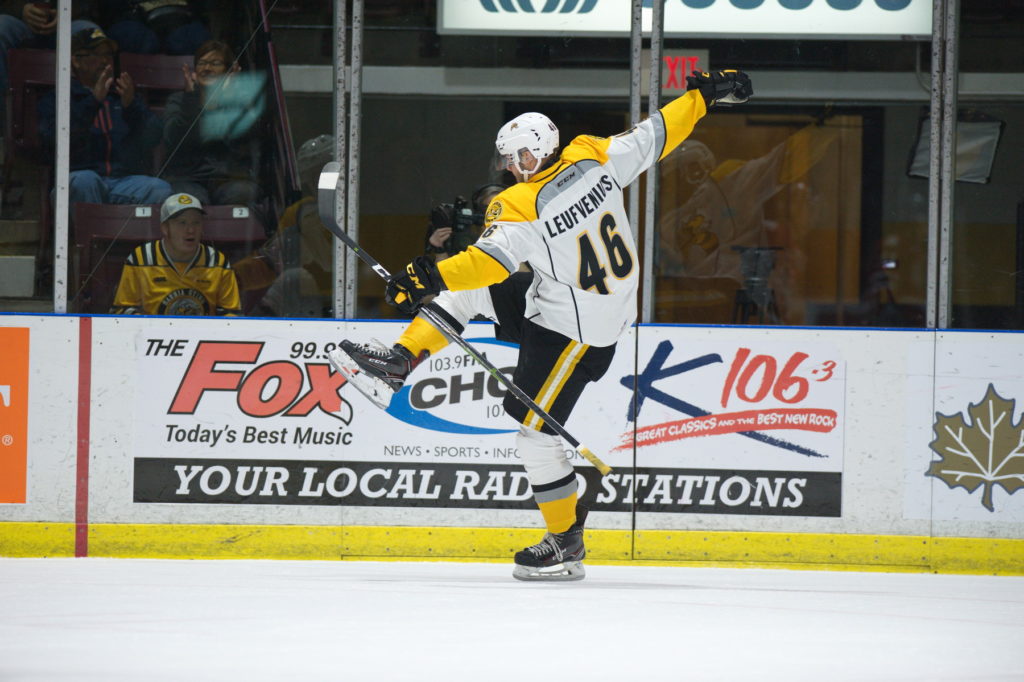 Incredible. There’s no other way to put it.

The Sarnia Sting visited the North Bay Battalion on Sunday afternoon. And boy oh boy did we see one of the best comebacks you’ll see all season long in the Ontario Hockey League.

Down two goals with less than three minutes to play, the Sting miraculously came back to tie the game before capping it all off in overtime. Let’s recap how we got there.

In the first period, Battalion forward Brandon Coe started off today’s scoring. When linemate Mason Primeau centered the puck out front, Coe nudged it through Sting netminder Ethan Langevin and over the goal line. 1-0.

A little over a minute later, Sarnia forward Curtis Egert tied the game. Egert caught a Justin McCombs pass in stride before sending a perfectly placed shot through Battalion goalie Christian Propp. For the first of many times today, we were tied.

Moving into the second frame, Sting forward Hugo Leufvenius put us on top 2-1. Sarnia defenceman Mitch Eliot hit Leufvenius with a hard pass in front, and Leufvenius whacked it into the cage for his twenty-ninth goal of the season.

Before the second period horn sounded, North defenceman Simon Rose knotted things up with a seeing-eye point shot. Through two periods of play, we were tied 2-2.

Little did we know that in the third period, things were about to get wild.

Midway through the final frame, North Bay looked like there were about to run away with this one. Two quick goals from Battalion forwards Justin Brazeau and Harrison Caines excited the home crowd with a 4-2 lead.

On a five-on-three powerplay with less than three minutes on the clock, Sting rookie forward Jacob Perreault brought us within one. After a crazy scramble sequence in front of Propp, Perreault was the one to tally the goal. All of a sudden, a nervous hush descended over North Bay Memorial Gardens.

It was Eliot who the played the role of today’s game-tying superhero.

With one minute remaining in regulation time, Eliot unleashed an absolute clap bomb from the point. It soared past Propp and into the twine. Sarnia’s bench was jubilant in celebration as they tied the game at 4-4. We were off to overtime.

To complete the comeback, it was none other than Leufvenius, our leading sniper. Leufvenius became our first thirty-goal scorer this season, recording the game-winning goal three minutes into the extra frame. It was Leufvenius’s second of the day, and it put a bold exclamation point on top of the win.

We were down 4-2 with less than three minutes left. We just won 5-4 in oooooooovertime!! Hugo for the win!#SARvsNB #ThePassionReturns pic.twitter.com/CnLQyYJaLo

Langevin made tremendous stops throughout the afternoon to give the Sting the opportunities they needed to complete the comeback.

We’re back in action on Friday night in Guelph. We’ll then play home games on Saturday and Sunday against the Storm and Kitchener Rangers. Come on down to The Hive by picking up your tickets below!