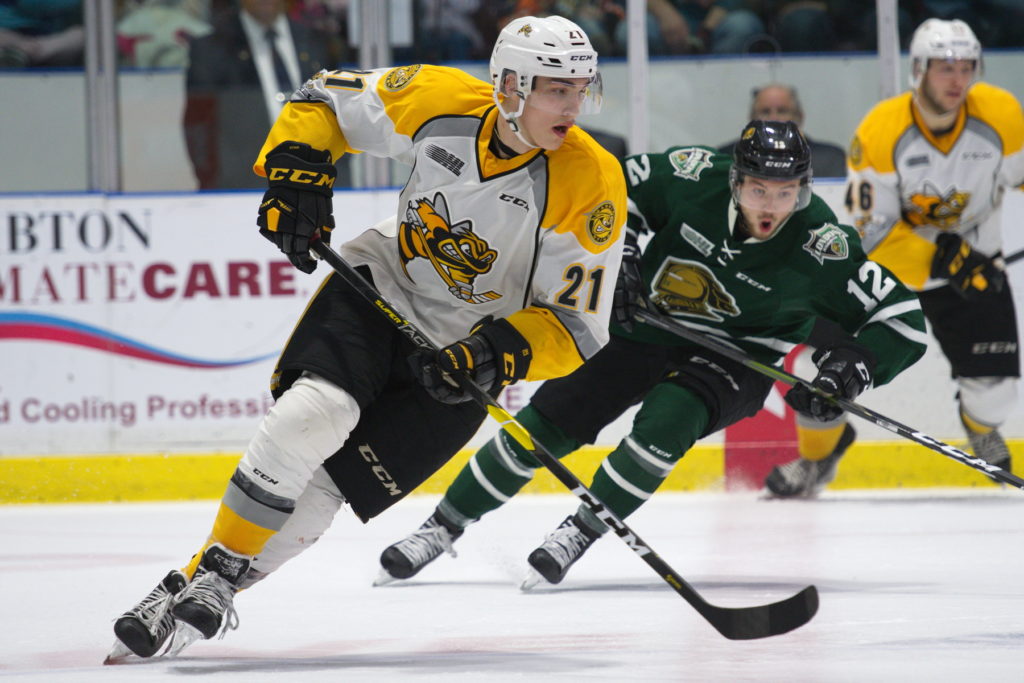 It was the fourth meeting of the season between these two Western conference rivals.

In the first period, we had ourselves a pure goaltenders duel. Sting goalie Ethan Langevin and London netminder Joseph Raaymakers each shouldered aside multiple scoring attempts. With both offences unable to find twine, we headed to the second period with matching donuts on the scoreboard.

Moving into the middle frame, the goals came fast.

Sting forward Hugo Leufvenius got things going just one minute in. Leufvenius planted himself in front of the Knights’ crease and received a pass from captain Ryan McGregor. Leufvenius quickly potted the puck for his team-leading twentieth goal of the season.

London responded with a pair of tallies. Josh Nelson and Gerard Keane each got one past Langevin, quickly doubling up on Sarnia’s lead. Knights forward Connor McMichael scored midway through the period to extend the visitors’ advantage to 3-1.

Fortunately for Sting supporters, draft-eligible forward Jamieson Rees is clutch. After a perfectly placed pass from defenceman Nick Grima, Rees fired a rocket one-timer past Raaymakers. With an assist on the play, Sting forward Adam Ruzicka recorded his 150th career OHL point. All of them have been in a Sarnia sweater. Awesome stuff.

With less than four minutes to play in the second, Sting defenceman Alexandre Hogue tied the game. Hogue went in on a breakaway against Raaymakers, dangled, and tied the game. Heading to the third, the Battle of the 402 was knotted at 3-3.

In the third period, each side exchanged a late goal. First it was Knights forward Paul Cotter. Cotter split two Sting defencemen before lifting a riser over the shoulder of Langevin. But the Sting came right back.

Ruzicka tied the game at 4-4. With a little over two minutes remaining in regulation, Ruzicka followed up his own rebound to square everything up. Rees was key to the goal, battling below the goal line to set up Ruzicka in front.

Overtime solved nothing, so we were off to the shootout.

Langevin turned aside all three shooters he faced. Leufvenius, being the super scorer that he is, won the game for Sarnia. Leufvenius deked Raaymakers to give us a 5-4 victory on home ice at The Hive.

We return to action on Friday night against Erie. Puck drop here in Sarnia is 7:05 PM against the Otters!