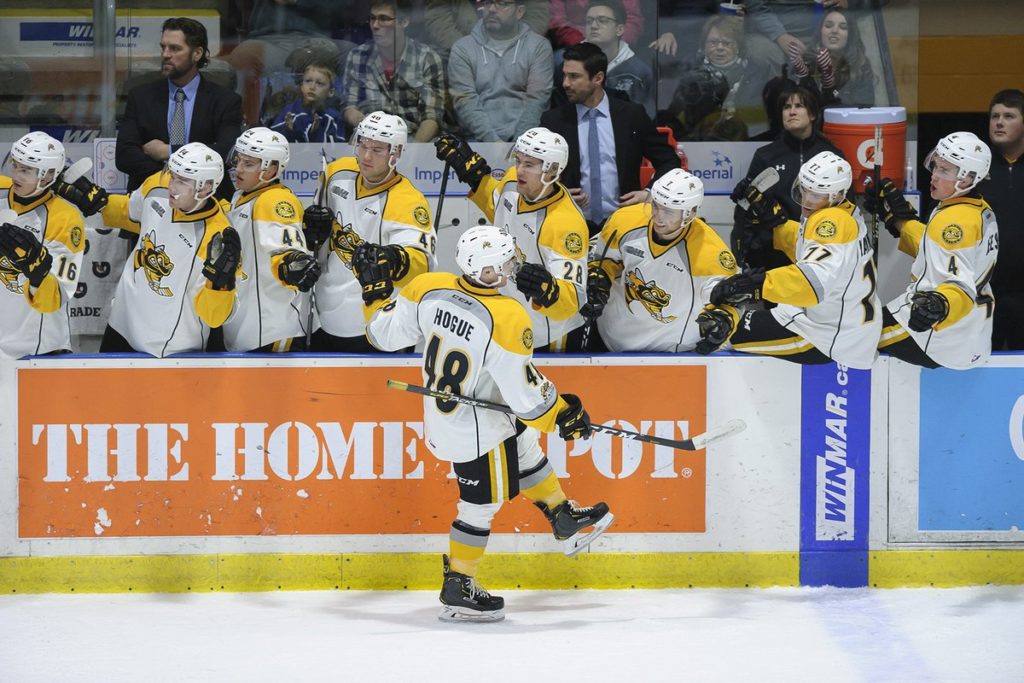 The Sarnia Sting hosted the London Knights on Sunday.

In front of a packed crowd at Progressive Auto Sales Arena, it was a real doozy of a game. Back-and-forth action filled the afternoon, and Sting fans went home real happy.

Starting with the opening period, Sarnia forward Jamieson Rees gave us an early 1-0 lead. Less than two minutes in, Rees maneuvered through traffic and whistled a long shot past Knights netminder Jordan Kooy. Hugo Leufvenius recorded the secondary assist on the goal, extending his point streak to an incredible nineteen consecutive games.

Rees would continue pacing the play throughout the first and set up our second goal of the game midway through. Rees skated down the ice on an awesome individual rush before putting the puck on net. When the rebound bounced out, Sting forward Brayden Guy was in the perfect place to pot a goal. Guy’s eleventh of the year gave us a 2-0 lead.

Before the end of the first, Sting defenceman Alexandre Hogue added another. Hogue sniped past Kooy for his fourth of the season. With an awesome leaping celebration, the crowd went nuts.

Cole Tymkin scored late for the Knights, but The Hive was pumped for a 3-1 lead after one period of play.

The second period was a mix of powerplays and penalty kills for each side. With no goals to show for them, we’ll move directly to a crazy third frame.

Not a team to sit back, the Knights made a real game of it. A pair of goals from Billy Moskal and a single tally from newly-acquired Joey Keane suddenly had the Knights ahead 4-3. But they seemed to forget about Sarnia forward Sean Josling.

Late in the third, Josling tied the game shorthanded. Streaking in with penalty-killing partner Calvin Martin, Josling scored from close in front of Kooy to make it a 4-4 game. In what was turning out to be a classic Battle of the 402, we were destined for overtime.

It was in the extra frame where Josling brought The Hive to its feet. The crowd erupted when Josling scored the game-winning goal. As defenceman Nick Grima swept around the back of the Knights’ crease, Josling positioned himself in the slot. When the puck came right to him, Josling hesitated for a flash of a second to freeze Kooy. Sniping past the London goalie, Josling gave us a 5-4 overtime win on home ice.

🐝OT WINNER!!🐝@seanjosling wins it 5-4 in OT in front of a packed crowd at The Hive! 😎#SARvsLDN pic.twitter.com/o7bwk2NHE5

Ethan Langevin was awesome in goal for the Sting, turning aside 27 shots on the afternoon.

We return to action tomorrow as we complete the New Year’s home-and-home in London! Puck drop at Budweiser Gardens is set for 4:00 PM.