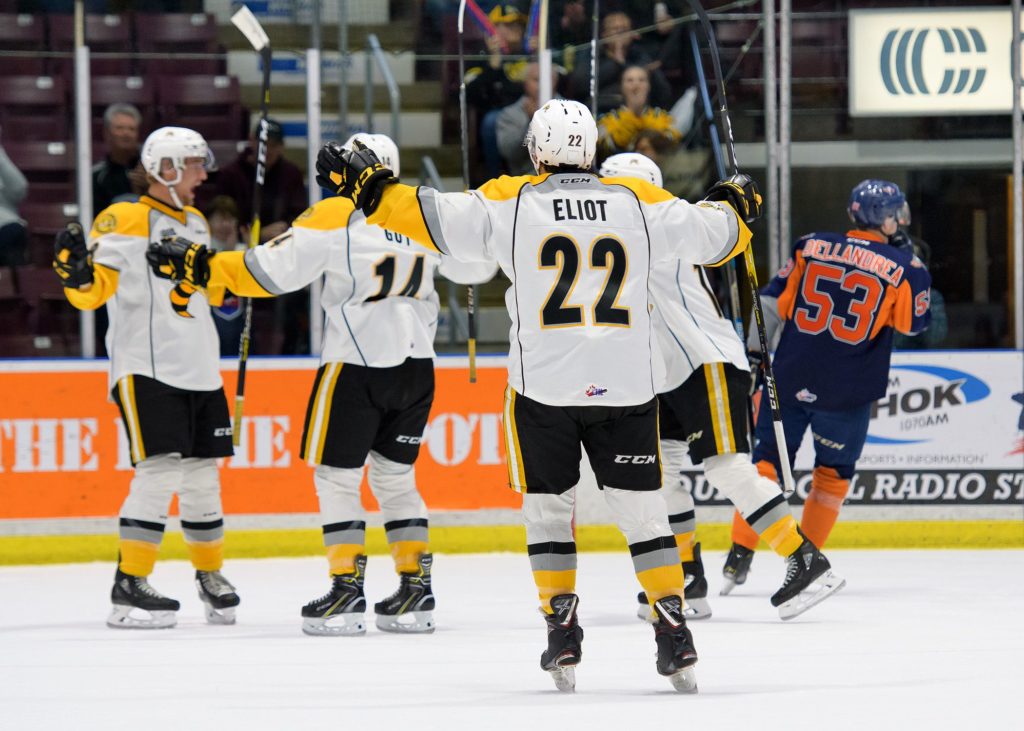 Kelton Hatcher wasn’t worried about it.

He knew this night would come eventually. The Sarnia Sting hosted the Flint Firebirds on Friday evening, and for Hatcher, it was a game he won’t forget.

The third-year Sting defenceman scored his first career Ontario Hockey League goal. Known as a hard-hitting blueliner, Hatcher has picked up plenty of assists, but hadn’t yet been able to bury one himself. Until tonight.

With eight minutes to play in the first period, Hatcher sent a low wrist shot in on Firebirds goaltender Emanuel Vella. With the Flint goalie unable to track the puck through traffic in front, Hatcher found twine. Every player in the Sting lineup went nuts. They were absolutely thrilled.

Hatcher spoke to TV Cogeco’s Terry Doyle in the second intermission and said it feels great to “get the monkey off my back.” Hatcher added that he hopes he can pick up a couple more this year.

Since the Sting were fired up, they came out and scored another goal just seconds later. Sarnia forward Calvin Martin scored his fourth of the season on a tally set up by defenceman Nick Grima.

In the second period, Firebirds forward Jack Wismer scored the frame’s only goal.

Moving into the third, the Sting worked hard to wrap this one up.

Franco Sproviero scored a beauty of a goal five minutes in. Sproviero dangled a Firebirds defender before finishing off an outstanding play. Check it out below.

Sting captain Ryan McGregor added an empty-netter to make it 4-1. Flint added a late goal from Jacob Winterton to make it 4-2, and that would hold as tonight’s final score.

Ethan Langevin picked up the win in goal for the Sting, stopping 28 of 30 shots faced. The official box score can be viewed right here.

We return to action tomorrow night to take on the Firebirds in the second-game of our home-and-home. We’ll see you again on Sunday afternoon when we host the Saginaw Spirit for our Halloween Game! Puck drop is 2:05 PM at The Hive!