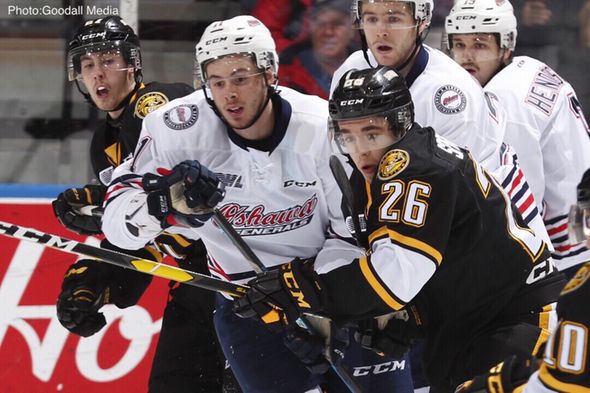 The Sarnia Sting visited the Oshawa Generals on Sunday afternoon.

It was the concluding game of a hard-fought three-in-three Eastern road swing. In front of a solid crowd at the Tribute Communities Centre in Oshawa, the Sting powered to an impressive 3-2 victory.

This afternoon was a big one for Sarnia goaltender Ethan Langevin. A native of Brooklin, Ontario, Langevin made the start in front of numerous friends and family. For the seventeen-year-old netminder, today was a huge win.

In the first period, the Sting fired a plethora of shots at the Oshawa goal. But they were having a tough time slipping one by Generals goalie Kyle Keyser.

The Gens took a late 1-0 lead with less than two minutes remaining in the opening frame. Eric Henderson managed to push a shorthanded goal past Langevin.

Sting forward Hugo Leufvenius made the breakthrough. With eighteen seconds left in the period, Leufvenius scored for the eighth consecutive game. Leufvenius hopped onto a loose puck in front of Keyser for his team-leading sixteenth goal of the season. After one, we had a tie game.

In the second, the Sting poured on the pressure. Generals forward Serron Noel gave the home side a brief 2-1 lead, but the shot clock was heavily weighted in favour of Sarnia.

Fifty seconds after Noel’s tally, Leufvenius scored his second of the day. Leufvenius unleashed a powerful shot from the top of the right circle. It soared past Keyser to knot to game at 2-2.

Sting forward Adam Ruzicka gave us the lead midway through the second. Franco Sproviero set up Ruzicka in an open lane, and Ruzicka fired away. The powerplay goal gave us a 3-2 lead.

There was no looking back.

As much as the Generals pushed, Langevin shut the door in the third period. The Sting peppered Keyser with a total of fifty-two shots today, and Langevin turned aside twenty-eight himself.

Langevin picked up the victory as we snapped Oshawa’s five-game winning streak.

We return to action on Thursday in Saginaw! Puck drop against the Spirit at the Dow Event Centre is 7:05 PM.