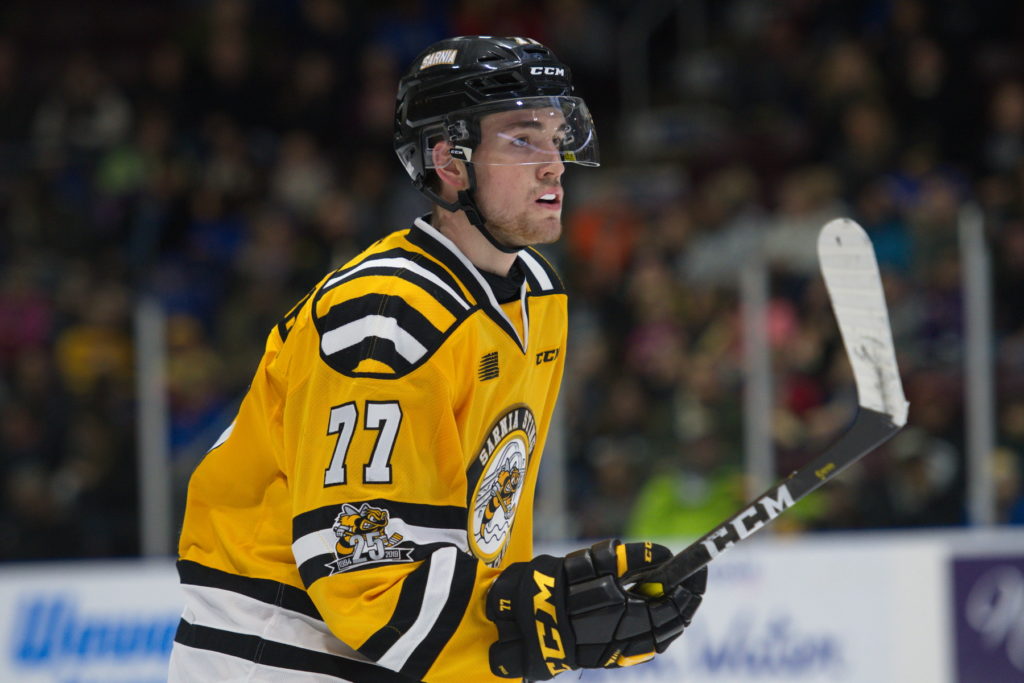 The Sarnia Sting visited the Saginaw Spirit on Saturday evening.

Cameron Lamour started between the pipes for Sarnia. Acquired from Saginaw in a trade earlier this week, Lamour returned to face his former team.

Tonight marked the Spirit’s annual Teddy Bear Toss at the Dow Event Centre. Midway through the opening period, Saginaw forward Albert Michnac gave the crowd what they wanted. Michnac drew out Lamour with some hesitation and gave the home side a 1-0 lead. Bears flew to the ice.

Danny Katic and Nicholas Porco scored two more for the Spirit in the first. After one, Saginaw held a 3-0 advantage.

Starting the second period, Jamieson Rees got the Sting on the board. Rees has looked exceptional this season. Down low in the Saginaw crease, Rees lifted the the puck up and over the pad of Saginaw netminder Ivan Prosvetov. Rees’s fourth in the last four games made it 3-1.

Saginaw was feeling it tonight and continued to score late into the second period.

Bode Wild, Aidan Prueter, Cole Perfetti, and Michnac all added singles in the middle frame. Heading to the third, Saginaw had a 7-1 lead.

To begin the final frame, Ethan Langevin replaced Lamour in net for Sarnia.

In the third, Sting rookie forward Jacob Perreault scored. Surprise! Perreault leads all Ontario Hockey League freshmen in goals this season. He now has 17. Rees rushed in towards the Saginaw crease and fired a hard pass to Perreault. Perreault drew out Prosvetov, proceeded around the cage, and wrapped the puck into the net. It made it 7-2.

Sarnia forward Franco Sproviero added another one late. Nick Grima engineered the goal with an awesome pass, and Sproviero finished it off. It was Sproviero’s thirteenth of the season.

The boys battled hard to the finish line as tonight’s final score was 7-3 for Saginaw.

We’ll return for the second half of the season in two weeks time. The entire Sting organization wishes you and your family a very happy holidays.