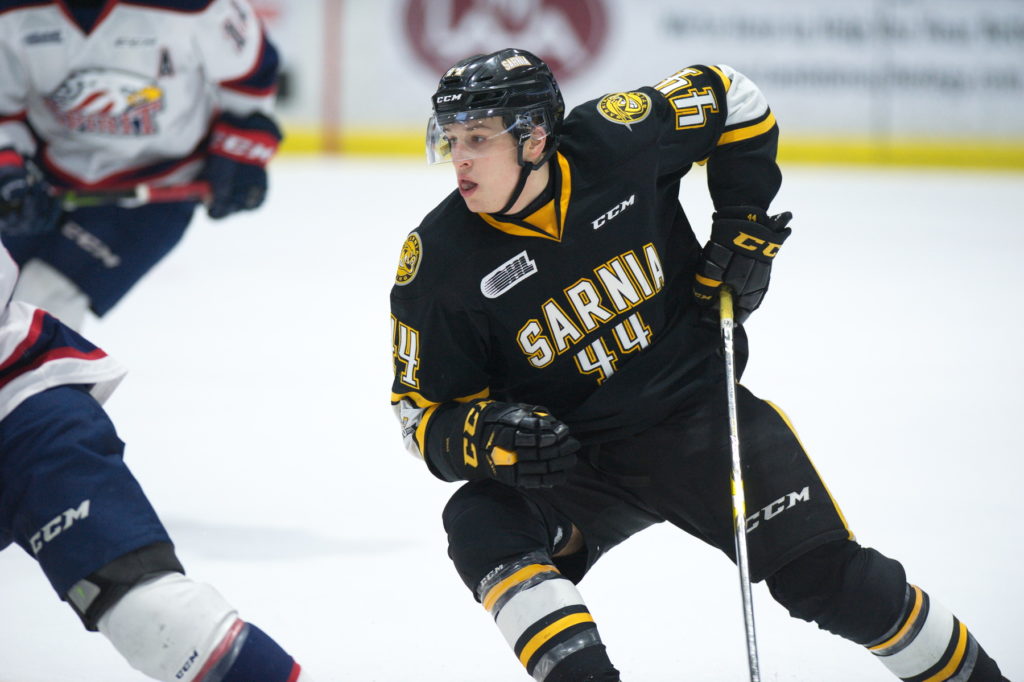 The Sarnia Sting hosted the Saginaw Spirit on Tuesday night.

In front of a great crowd at Progressive Auto Sales Arena, this was a huge game with playoff implications for both teams.

Sting skaters Nolan DeGurse and Marko Jakovljevic had Sarnia’s best chance of the opening period. The pair soared in on a two-on-one and just had the puck skirt away from them before they had a chance to fire on Spirit netminder Ivan Prosvetov.

Spirit forward Ryan McLeod scored the lone goal of the first frame past Sting keeper Cameron Lamour. McLeod picked up his nineteenth of the season with fifteen seconds remaining in the period. After one, Saginaw held a 1-0 lead.

In the second, the Sting came right back.

Sarnia captain Ryan McGregor scored our league-leading twenty-second shorthanded goal of the campaign. Sean Josling broke in on a breakaway and deceptively dropped the puck back behind him. McGregor was there to pop the puck past a sprawling Prosvetov. It was McGregor’s twenty-fifth tally of the season. We had a 1-1 tie game.

Saginaw responded on the the very same powerplay on which McGregor had scored shorthanded. It looked like Spirit forward Owen Tippett had put the puck over the line, but captain Damien Giroux received the rightful credit. 2-1.

Sting forward Hugo Leufvenius responded. Leufvenius scored his team-leading thirty-sixth of the season with a blistering wrist shot. McGregor had forced a turnover in the neutral zone, and Leufvenius took care of it from there. It was a tremendous goal to tie the game.

Spirit rookie sniper Cole Perfetti dangled his way to the net to give Saginaw a 3-2 lead after two periods of play.

In the final stanza, Tippett, Blade Jenkins, and Giroux scored single tallies for the Spirit. The final score was 6-2. We had a great effort that just didn’t quite translate on to the scoreboard. We’re already pumped for the weekend!

We return to action for a massive game on Friday night at The Hive! We’re battling Windsor for a playoff spot, and guess who’s in town! You won’t want to miss this one. Tickets can be picked up below or right here!