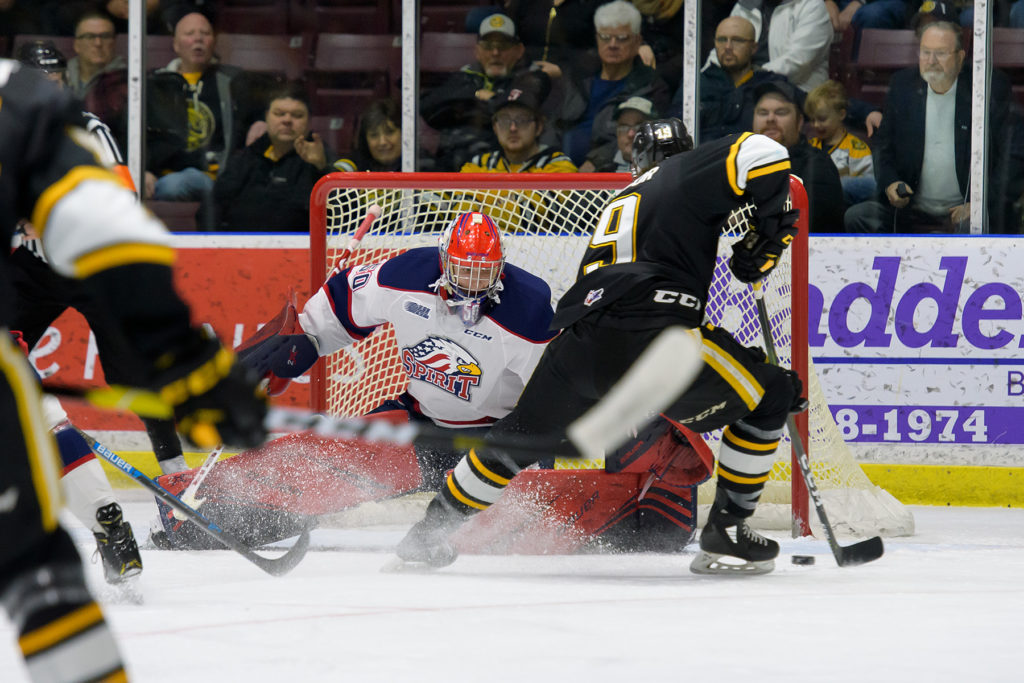 The Sarnia Sting hosted the Saginaw Spirit on Tuesday night.

It was game three of our Western conference quarterfinal series. This was our first home game of the postseason; the mission tonight was to tighten things up on home ice at Progressive Auto Sales Arena.

In the first period, Saginaw opened the scoring. Spirit sniper Owen Tippett shot a rocket past Sting netminder Ethan Langevin from between the circles.

Midway through the frame, Spirit forward Camaryn Baber made it 2-0. But we were determined to fight back.

Sting forward Justin McCombs scored his first career Ontario Hockey League playoff goal. McCombs drove hard to the net following a slick rush from linemate Anthony Tabak. With the puck loose in front of Saginaw goalie Ivan Prosvetov, McCombs was in the perfect position to pot the rebound. After the first period, it was a tight 2-1 game.

.@MccombsJustin picks up his first of the postseason thanks to some slick moves from @tabak_6! 😎#SARvsSAG pic.twitter.com/s19Ccxa5kj

In the second stanza, the pace slowed slightly. Both goaltenders locked in on some special teams play. Spirit captain Damien Giroux scored the frame’s lone goal. Giroux sent a shorthanded wraparound past Langevin to make it 3-1 through two periods of play.

Moving into the third, Saginaw took control. Shorthanded tallies from Justin Murray and Reagan O’Grady, combined with a powerplay goal from Jake Goldowski, launched the Spirit to a 6-1 lead. It held as the final score.

We’ll be ready for a must-win Game 4 on Thursday night. Come out and support the boys at The Hive as we look to begin the comeback!