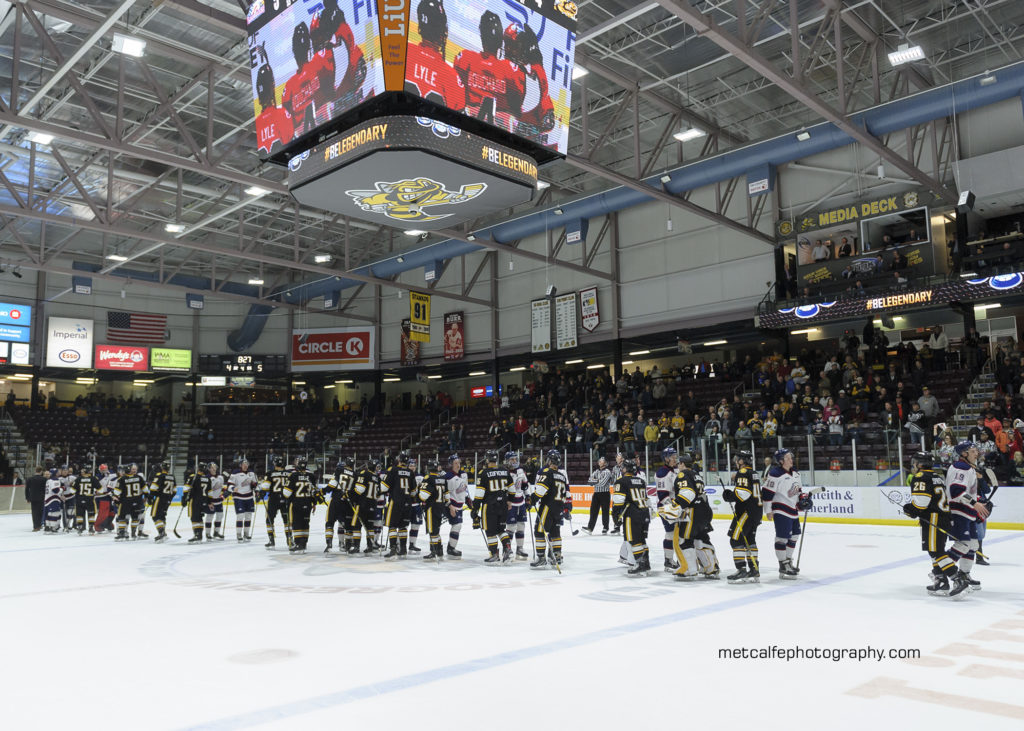 The Sarnia Sting hosted the Saginaw Spirit on Thursday night.

It was game four of our best-of-seven Western conference quarterfinal. Down three games in the series, this was a must-win battle for the Sting at Progressive Auto Sales Arena.

Saginaw opened the scoring just over one minute in. Spirit forward Brady Gilmour dished a cross-crease pass to linemate Owen Tippett to give the visitors an early lead.

Late in the first, Spirit captain Damien Giroux lifted Saginaw into the lead. When defenceman Hayden Davis’s hard shot rebounded off the back wall, Giroux potted the loose puck past Sting goalie Cameron Lamour. It was 2-1 after one.

In the second period, Sting captain Ryan McGregor was ready to take charge.

McGregor scored tremendous back-to-back goals to propel Sarnia into a 3-2 lead. The first one was shorthanded in typical McGregor-fashion. McGregor danced around Spirit defenceman Bode Wilde and swiftly scored on Prosvetov. McGregor’s second snipe came in similar breakaway action, as he used his speed to race in on goal and finish it in style. Outstanding work from our leader.

Sting forward Justin McCombs gave us another one. McCombs scored his second goal in as many games to give us a 4-2 lead through two periods of play.

In an intense third frame, the Spirit powered back with a pair of goals. DJ Busdeker scored five minutes in and Ryan McLeod tallied with just over three to play in regulation. It was suddenly 4-4, and we were bound for overtime.

The extra stanza was incredibly intense. Back-and-forth chances were plentiful for both teams. Lamour and Prosvetov were turning asides shots all over the place. But, someone had to win tonight, and Saginaw made themselves that team.

It was an outstanding year for a very young, very talented Sting team. The future is incredibly bright in Sarnia. We’ll see you next season. We have no doubt that the best is still to come.