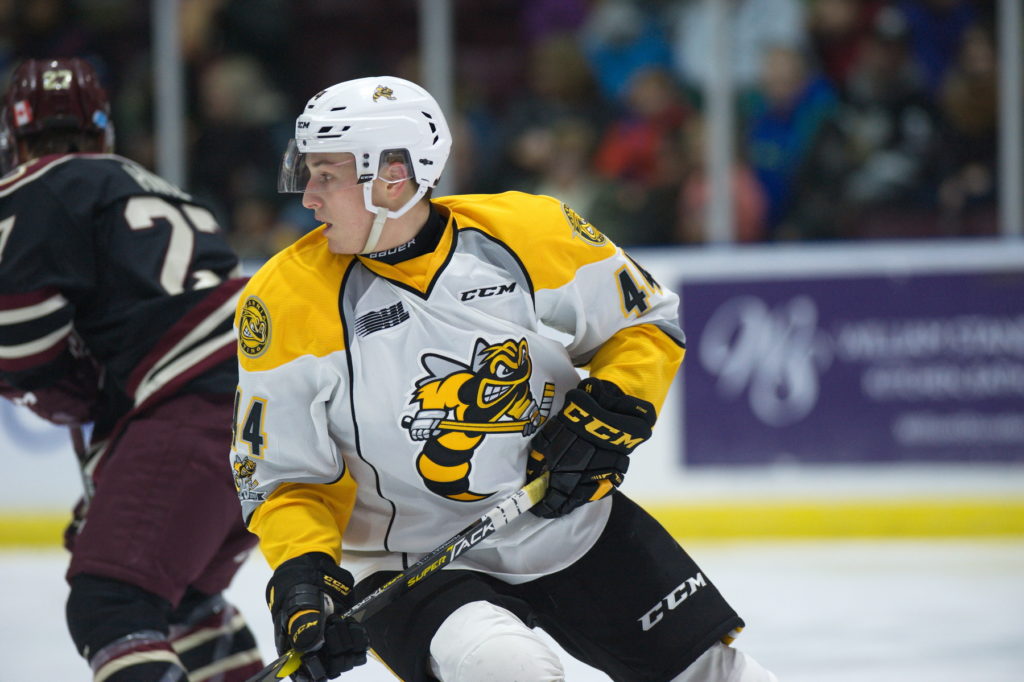 The Sarnia Sting visited the Peterborough Petes on Saturday night.

It marked our only regular season visit to the Peterborough Memorial Centre this season. The crowd was full at the PMC and they were treated to back-and-forth action all night long.

In the first period, the Petes got off to a red-hot start. Petes rookie Cameron Butler opened the scoring. With the Petes on a man-advantage, Butler took a long one-timer that squeaked through Sting netminder Cameron Lamour.

One minute after Butler, Peterborough defenceman Shawn Spearing doubled the lead. Spearing shot through a screen to get the puck up over the shoulder of Lamour 2-0.

Ryan Merkley made it 3-0. The star Petes defenceman pinched below the goal line and chipped a bouncing puck past Lamour. Following the Petes’ third goal, Ethan Langevin took over in the Sting crease.

As it’s often intended, the goalie changed sparked an extra gear from the Sting.

Sarnia rookie Jacob Perreault scored his twentieth of the season to get us on the board. Directly off a faceoff to the left of Petes goalie Hunter Jones, Perreault unleashed a knuckle puck that found its way into the net.

Only a minute later, Sting defenceman Colton Kammerer scored his third goal of the weekend. After scoring a pair in last night’s win over Erie, Kammerer was back at it again today. Kammerer scored a powerplay goal from the right circle to bring us within one. After one period, it was a 3-2 game.

Early in the second period, Sting overage forward Franco Sproviero tied the game. After linemate Sean Josling led a rush through the neutral zone, Sproviero took the setup pass and sniped one past Jones and under the crossbar. We had just scored three unanswered tallies to tie the game at 3-3.

Midway through the second frame, our wave of momentum turned back into Peterborough’s favour. Nick Robertson, John-Parker Jones, and Chad Denault all scored to give the Petes a 6-3 lead after two.

The third period saw a couple close chances for us in tight on Jones, but the big goalie turned aside great scoring opportunities from Josling and Jamieson Rees. Jones made clutch saves tonight, leading the Petes to a final score of 6-3.

Langevin made some awesome stops, including a right-pad penalty shot save on Erik Čermák late in the first.

We return to action tomorrow afternoon in Mississauga! Puck drop at the Paramount Fine Foods Centre is 2:00 PM against the Steelheads.