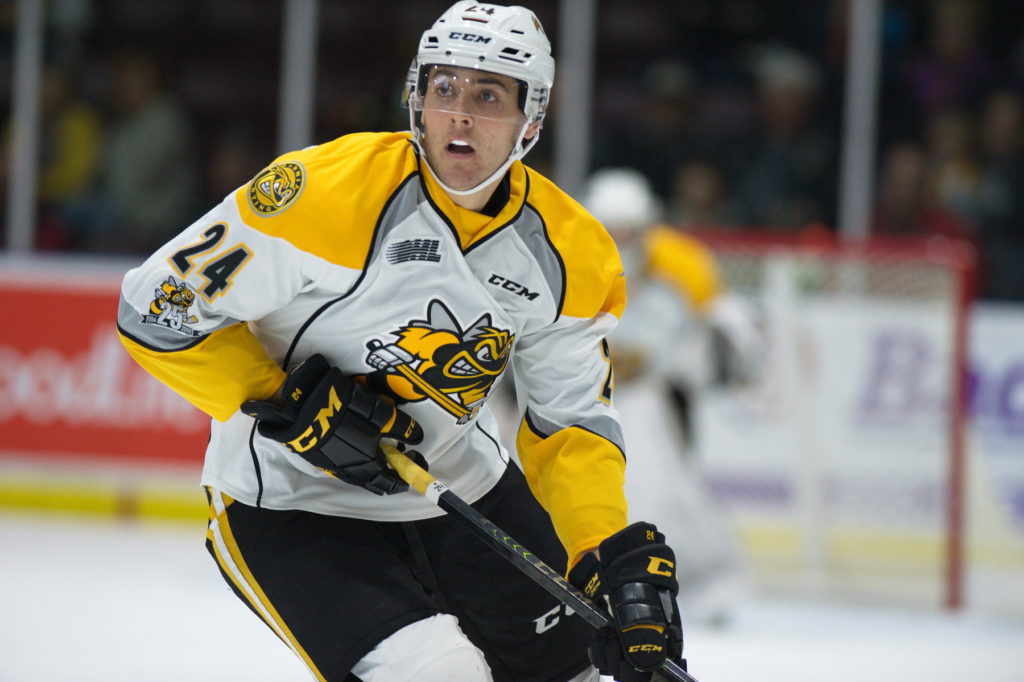 It was the second game of a three-in-three Eastern conference road trip for the Sting this weekend.

Following a big win last night in Kingston, the Sting continued the momentum early. Sarnia forward Sean Josling scored just one minute into the game. When a point shot from defenceman Mitch Eliot took a wild bounce off his stick, the puck landed right in Josling’s wheelhouse. Firing from between the circles, Josling sent the puck past 67’s goalie Will Cranley to give us a 1-0 lead.

We carried the pace of play for the majority of the first period. Just after the frame’s halfway mark, Ottawa forward Kody Clark tied the contest. Clark took a perfect pass from linemate Sasha Chmelevski and potted one past Sting goalie Aidan Hughes. 1-1.

Ottawa forward Austen Keating scored late in the first to give the 67’s the lead. After the opening period, the home side was up 2-1.

In the second period, 67’s veteran Tye Felhaber extended their lead with a forehand-backhand move in front of Hughes. 3-1.

The Sting have been lethal on the penalty kill of late, and today was no different. Sting forward Anthony Salinitri scored shorthanded for the team’s tenth marker this season while playing a man down. Salinitri broke in on a rush with Josling and lifted the puck high past Cranley. For Salinitri, it was his fourteenth goal of the season.

.@A_Sali98 is on 🔥🔥 and we continue to be the scariest PK in the league these days! ANOTHER shorty!#SARvsOTT pic.twitter.com/UEe12Vphyf

The second period was a chippy one, with both sides engaging in numerous scrums after the whistle. When the buzzer sounded to end the frame, the teams gathered in a bit of a melee at the red line. Heading to the third, this one was up for grabs.

As things turned out, it was the 67’s who grabbed the reigns on home ice. Merrick Rippon and Keating scored two quick goals in the first minute of the third.

Sting forward Franco Sproviero responded with a beauty 2-on-1 goal set up by Hugo Leufvenius, but the 67’s would not surrender the lead.

Sam Bitten, Clark, and Chmelevski all scored in succession to break this one wide open. Leufvenius tallied a late marker for the Sting, but this one went the way of the 67’s.

The final score today was 8-4 for the Barber Poles. An official box score can be viewed here.

We return to action tomorrow afternoon in Oshawa to face the Generals! Puck drop goes down at 2:05 PM. We’ll be looking for a strong finish to this road trip!